The Apex Legends roadmap came about just as swiftly as the battle royale itself. Respawn has wasted very little time in kitting out Apex Legends with features, an esports tournament, and a firm plan of content for the future. It’s a good thing, too – Epic Games has taught us that a well-implemented battle pass can keep players engaged while ensuring the game montatises effectively. On top of that, a solid drive of player-spending means that Fortnite and Apex Legends can pull off being free-to-play. While PUBG initially started as a premium game, it also got in on the battle pass trend later on in the game’s life cycle.

Going on that, it’s wise if not unsurprising that Respawn already has a plan in action for Apex Legends. The game currently has nine Legends, more than 20 Apex Legends weapons, a swathe of cosmetics, and now a battle pass. As such, we’ve gotten a glimpse of Apex Legends gameplay, aesthetic, world, and are now starting to see the kind of challenges the battle pass will pose to players.

Respawn has already said that its battle pass is an evolving thing, so how it currently works certainly may not be how it’ll always work. That was mentioned in response to fan outcry on Reddit as many deem the first battle pass dull. Here you’ll find everything we know about the present and future of the Apex Legends battle pass based on the game’s roadmap.

We don’t have to wait long for our next update, the Apex Legends Battle Pass Season Two release date is July 2, 2019. We don’t have the exact time just yet, but the Season One battle pass released at 10:00 AM Pacific Time, so bets are in for around then.

It’s a day or two out from the initial roadmap image that said the update would land in June, but Respawn has been vocal about Apex Legends upcoming content – mainly how the team is growing to meet the demands of the community, while also maintaining a healthy workforce.

Proper details about the next Battle Pass are still to come. Assuming, however, that nothing has changed since the first Battle Pass, The Apex Legends Season Two Battle Pass should cost 950 Apex coins, which sets you back $10 USD. Following that line, If you want to level up your Battle Pass even faster, you should be able to pick up a Battle Pass Bundle for 2,800 Apex Coins, which unlocks the next 25 Battle Pass levels and their rewards automatically.

In Season One, There were over 100 battle pass rewards to earn over 100 reward tiers, which included skins for Lifeline, Wraith, and Mirage alongside weapon skins, banner frames, and XP boosts. On top of that, there was also an evolving skin for the Havoc, which gains glowing red eyes and smoking nostrils the more kills you get. If you want to get this, however, you’ll need to have ranked the battle pass all the way up to 100. We know that the Season Two Battle Pass will have more of this, but, as we say, specifics are yet to come.

The free rewards for Season One include one Wild Frontier Legend skin and 18 Wild Frontier stat trackers. You can also grab five Apex Packs, which drop random cosmetics or craft materials. Whether or not you’ve bought the Battle Pass, anyone can earn these items for free by playing over the course of the season. It’s highly likely we’ll see free rewards in Season Two, also.

One thing we do know about Season Two, however, is that we’ll be getting a ranked mode. The way it works is fairly traditional in the sense that you ascend tiers for performing well. In this case, the ranks are bronze, silver, gold, platinum, diamond, and Apex Predator.

We’ll also see Apex Legends’ new legend, which is an electrical engineer called Natalie “Wattson” Paquette. Her tool kit revolves around area denial, and this is achieved through the electric fences she can put up. Story-wise, she is the daughter of the Apex Games’ lead electrical engineer, and spent her whole life growing up in the arena she helped him create. 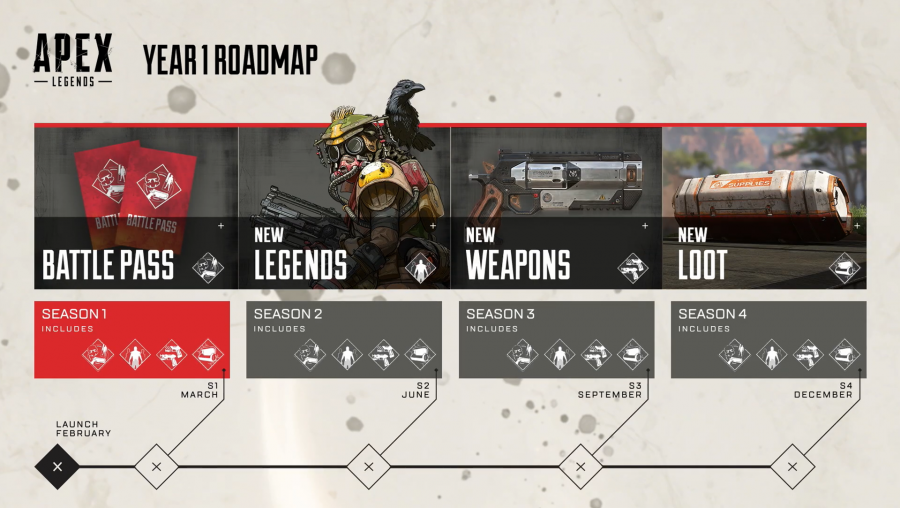 There will be two more seasons throughout the year after the next one starts in July. Season One has given us our first taste of the Apex Legends Battle Pass and introduced more legends, weapons, and loot. As Respawn has confirmed, the other seasons will do so, too.

Each season is three months in length and the third season will kick off in September, and the fourth in December. Each one of these will also bring in additional legends, weapons, and loot. A new Battle Pass will also be introduced at the start of each new season.

The season-specific Battle Pass will appear most familiar to Fortnite players, and it looks likely that Apex Legends will follow an astonishingly similar rhythm.

And there you go, roughly what to expect from the Apex Legends battle pass and the full Apex Legends roadmap. If you’re happy to bide your time by honing your skills at the game, though, then our Apex Royale tips guide may give you an edge. If you’re still iffy about who you would like to main then our Apex Legends characters guide has a couple of suggestions for who you should check out. Apex Legends is very much enjoying some early game hype right now due to some fantastic gameplay, but only time will tell if Respawn and EA can hang on to that playerbase through the battle pass.