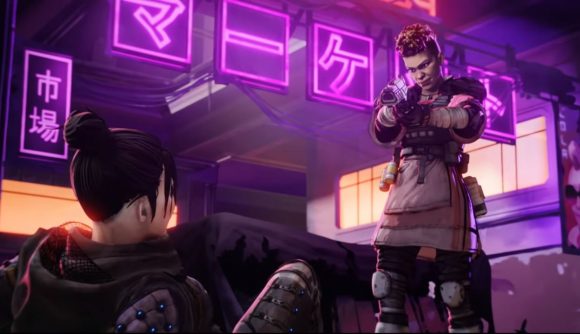 During a light-hearted sparring on Twitter with KFC’s Gaming channel (yes, this is a real thing), and some commenters responding to its meme-d nudging of Respawn Entertainment, Apex Legends developer Rayme Vinson stated that the studio’s team has been “growing since launch”, and that they’ve “got tons of stuff coming”.

Vinson told KFC Gaming that, while content is on its way, “it takes a little time”, and that the “gameplay is hand-crafted using old-world techniques”, advising them to “eat some chicken, we’ll see you soon”.

This revelation will likely excite players who have been frustrated with what they perceive to be a lack of updates for the free-to-play battle royale title since its release in early February. On the topic of Apex’s content releases, influential streamer and captain of Fortnite Team Solo Mid (TSM), Myth, recently opined that, while he thought pushing out content for the sake of it was “unhealthy”, offering too little content over too great a period of time could “burn bridges VERY fast with your community”.

Vinson seems to acknowledge this sentiment in his messages, at one point saying he gets “that people will be giving us side-eye until they see some of the stuff we’re doing”.

Dearest brand. We've got tons of stuff coming, but it takes a little time. We can't hyper-fry or flash-flambe or crunch-inject or whatever it is you do to your tasty fried birdflesh. This gameplay is hand-crafted using old-world techniques. Eat some chicken, we'll see you soon.👍 https://t.co/PEzUcWCRzA

Responding to a comment asserting that Respawn had probably re-allocated most of its resources to the upcoming Star Wars Jedi: Fallen Order single-player game, expected to arrive on 15th November 2019, the dev further reassures players that the same team who built Apex Legends continues to build it.

Looking to be a Legend? Check out the best Apex Legends ranked

From these tweets, it’s still not clear what “soon” means, or exactly when players will get to taste the sweet fruits of this “hand-crafted” content. It looks like fans of the game will just have to hold out that bit more for their long-awaited legendary loot.