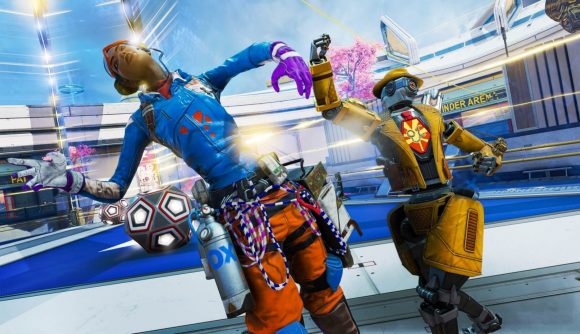 Finally, Apex Legends will let you settle your grudges the old-fashioned way: fisticuffs. The Fight Night event, starting in just a few days, introduces a boxing ring, new game-type, and a wealth of cosmetics, bug fixes and meta changes.

Firstly, that ring. Pathfinder’s town takeover brings what’s basically an UFC cage made out of force-fields to Olympus. Located beside the Arcadia Supercarrier, weapons and items can’t be used in the squared circle, nor can projectiles of any sort be thrown in. Anyone that gets in is protected, unless you follow them for a close-quarters brawl. Rare loot will spawn inside, just to spice things up.

In a slight change of pace for the FPS game, instead of making the Airdrop Escalation game-type its own individual playlist, it temporarily takes over the standard game mode. Essentially, it’s the same battle royale game you already know, but with sizably more supply drops. The rate is the same as Lifeline’s care package, according to EA’s blog, and these special drops will each include a fully kitted-out weapon. Regular drops still litter the ground as usual.

The Gibraltar Heirloom is your prize for getting all 24 of the limited-time cosmetics, and developer Respawn has brought MRVNs back in Olympus, to give you some loot of varying rarity. You’re looking for a purple or yellow face to get something valuable.

Rampart’s Amped Cover and Caustic Nox Gas Trap have both had their cooldowns decreased, and Hemlock, Mastiff and Prowler have each had tweaks.

The Fight Night Collection event starts January 5. You can read more, including bug fixes and quality-of-life updates, in the full patch notes.