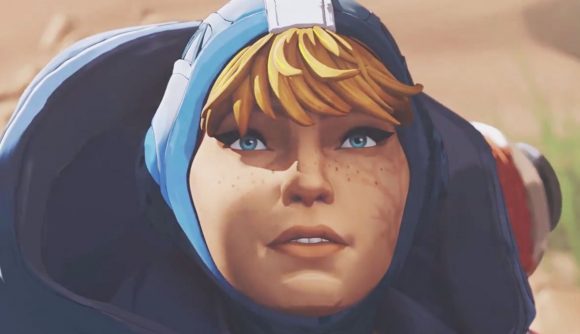 Ahead of the start of Apex Legends Season 2, two new trailers for the game have leaked. The videos, which were posted to Reddit earlier today, offer a look at an updated version of King’s Canyon and upcoming character Wattson.

The first, animated trailer, focuses on a set of skirmishes between a handful of teams, culminating in a pretty exciting moment where Octane launches through the air with his ultimate and lands a jumping kick right in Mirage’s smug face. From there, however, things take a turn, as a mysterious figure activates an EMP in the radio mast next to Hydro Dam, bringing it crashing down on top of that very same Octane, who has to be revived courtesy of new character Wattson.

That collapse leads directly into the next trailer, which takes the form of a series of news reports documenting the tower’s collapse. It would seem that the damage that occurred as a result has made some significant changes to the map, with several areas now partially destroyed by the impact.

One report says that “beasts have once again taken their native place on the island,” with a close-up shot of those pesky dragons. Another states that “the absence of Legends has allowed certain areas to stabilise and regrow,” making the muddy wasteland towards the west of the map much more verdant.

Both season 2 trailers in FULL HD Quality! from r/apexlegends

One report says that “personnel confirmed they’re taking this opportunity to add some new features to the arena,” with shots of new buildings and cages – hopefully openable – containing yet more dragons. Most important, however, is the fact that the enormous Leviathan, once confined to the seas beyond King’s Canyon, now seems free to roam the island at will – the trailer shows the massive creature literally stepping on Mirage as he gloats over a kill.

There are a host of other features confirmed in the trailer too. A new energy weapon makes an appearance, and we also get a look at an extremely badass finisher from Wattson, who’ll make her way to the game in the new season. There are also new skins, a new Battle Pass, new Skydive emotes, and a new ranked mode, allowing you to level up from bronze to Apex Predator.

Related: Here’s what we know about the Apex Legends roadmap

Finally, the two trailers confirm that Apex Legends Season 2 will be called Battle Charge, and will begin on July 2, meaning less than a week to wait for all that new content. Until then, both of those trailers are pretty fun, and you can check them out back-to-back in the Reddit post embedded above.