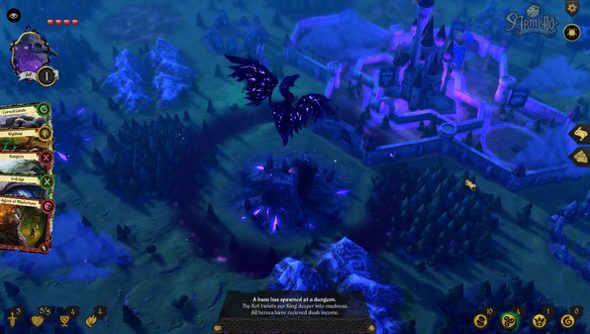 Armello is a beautiful-looking (and maybe even adorable) fantasy strategy game that owes a lot to the board game space, but which could only exist in an electronic medium. It caught our eye at Gamescom last year, and now it’s just come out on Early Access.

Designer Trent Kusters told me a bit about Armello when he was passed through Boston last year, and even a year ago the prototype cooked-up by development studio League of Geeks looked quite impressive. The art direction that reminded me of Disney’s Robin Hood or Sleeping Beauty, and the game itself looked like it owed quite a bit to games like Dominion and Shadow Over Camelot. Kusters described the team’s vision for Armello as a board game come to life.

A combination of hex-based strategy gaming, RPG party-building, and card games, Armello captured the imagination of a lot of backers on Kickstarter last spring, and now it’s hit Steam Early Access. The Early Access price is $25, but until January 29th, it’s going for $20..

Below, you can hear Kusters explaining a bit about what this Early Access build is for, and what you can expect from the game. There’s also a gameplay trailer on Youtube.

It definitely looks wonderful, but the proof is in the pudding. Hopefully, we can spend some time with the game soon and give you some better impressions of where it’s at, and whether this is an Early Access journey you want to take.