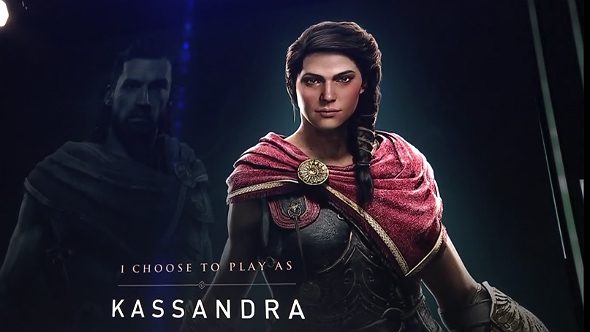 Ubisoft announced during their E3 2018 press conference that you can choose your gender in Assassin’s Creed Odyssey. You will start your game with a choice: Alexios or Kassandra – the former is male, the latter female. Depending on which character you pick you will also bear the weapon of that character’s bloodline.

This is not the first time in an Assassin’s Creed game where you can pick either, as the London-set Assassin’s Creed: Syndicate let you choose between Jacob and Evie Frye in your quest to liberate Victorian London from the grasp of the Templars. Assassin’s Creed Odyssey seems to expand the impact of the choice, offering Alexios the spear of Leonidas as his starting secondary weapon – no sign of where the hidden blade will feature in Odyssey.

After more details and speculation? Here are all the latest details on the Greek-set sequel, including an Assassin’s Creed Odyssey release date.

Kassandra’s starting weapon is not yet known, but it’s clear that the choice of player character in Assassin’s Creed Odyssey extends far beyond gender. It’s just one example of how the team at Ubisoft Quebec are making player choices more important for the upcoming RPG.