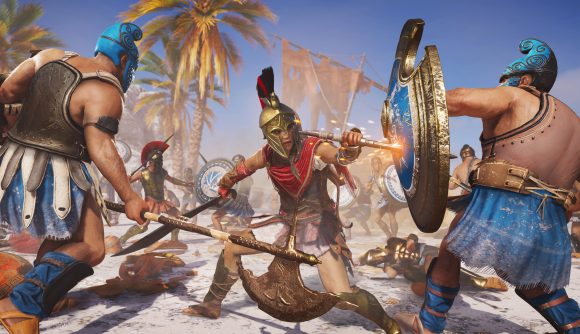 Assassin’s Creed just keep getting bigger, and the Assassin’s Creed Odyssey is no exception. Not only is the game’s map bigger than the one in Origins, the volume of content in the game means it’s “much longer” that Bayek’s adventure, too.

That comes straight from game director Scott Phillips during a rapid-fire Q&A session with Game Informer. Asked if Odyssey would be the same length as Origins, Phillips replies “no, much longer.” He also confirms that the map will be bigger this time around – with “a ton of stuff to explore and find and discover” – something that’d been suspected since getting a glimpse of the overview months ago.

It’s an impressive stat considering how big Origins already was, with normal story completion typically taking around 30 hours according to HowLongToBeat, and you could easily push that to 50 with a healthy dive into side into content. Add in some inevitable DLC and – well, my own Origins save clocked in at 76 hours once I was done with Curse of the Pharaohs. It seems Odyssey wants to push things to near-Persona lengths.

You can see the full interview below, with the relevant bit on game length starting at 3:06.

The ever-increasing hour count is good news if your gaming dollars are going to be limited around the Assassin’s Creed Odyssey release date, though the previous game’s breadth could occasionally get in the way of its depth. We’ll find out how Odyssey stacks up in a little less than two months.