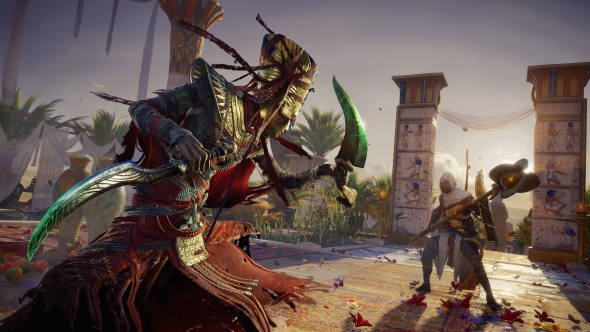 I have long thought of the Assassin’s Creed series like fast food. Ubisoft Montreal tried to change that with Assassin’s Creed Origins by evolving the series’ tired gameplay loop with additions largely lifted from games like The Witcher 3 and Far Cry 3. But I am still mostly engaged with tasks which offer short-term satisfaction – filling progress bars, hoovering up treasures, and other quick fixes. It is comforting and pleasurable, certainly, but I cannot escape the feeling that I should probably be playing something else.

I feel precisely the same way about the action-RPG’s latest DLC, The Curse of the Pharaohs, after spending two hours with it. It sees Bayek off to Thebes and the Valley of the Kings to unravel more ancient Egyptian mysteries. Leisurely as that sounds, it soon turns rotten, as pharaohs start rising from their resting places, and it is up to Bayek to kill ‘em dead all over again.

Here is how Assassin’s Creed Origins’ Discovery Tour shows the power of gaming can transcend entertainment.

At severals points in my time with this DLC, a notification warns me that one of these mischievous mummies has risen from its sarcophagus to terrorise the living. In gameplay terms, this is the only new thing about The Curse of the Pharaohs that I can detect. I am unsure what you get for dispatching one of these threats as, er, I did not successfully do so once. Before I could deliver the finishing blow, each grumpy mummy returned to the afterlife, either terrified or bored of me. I hope it was the former.

It is a shame that my time in Thebes is broken up by these mythical invasions as it is a beautiful place. I weave through a labyrinth of darkened side streets that, now and again, make way for bright and colourful plazas, meeting places flecked with patches of flora. After climbing a large wall – my parkour skills could use a warm up – I emerge in the grounds of a stupendous area of Luxor. Vibrant flags adorn towering pillars on the pathway to the main entrance. Vast statues glance down at me from above. Looking up open-mouthed at the size of this wonderfully recreated structure, I do what any respectable Assassin would: scramble to its summit and synchronise.

Assassin’s Creed: The Curse of the Pharaohs looks as good as you would expect. However, it is when I begin the main missions that my initial awe abates. In my search for the thief of a rare artefact that awoke the monstrosities, I need to speak to some decidedly shifty traders in a bazaar. The bright yellow ‘Investigation Area’ emblazoned at the top of the screen informs me that I need to get chatting. The man I am pointed towards then ambushes me with his personal thugs. Clearly, Thebes’ merchants have not heard of me. As I fight off my assailants, I recall a very similar mission I encountered in the main game. Side missions, again, are mostly NPCs pointing you towards a bandit camp or some such, with a thin mini-narrative to contextualise it. I would be switching off if it were not for the quest’s lovely name, No Honour Amongst Thebes.

In hopes of finding something more interesting, I follow the main mission again, which drags me further away to Thebes’ outskirts. Once across a large river I scale the hill to Set-Ma’at that allows me to overlook the city. Fortuitously, it is sunset, the ancient Egyptian sun bathing my previous location in a lurid pink – a wonderful view. It is at this point that I realise The Curse of the Pharaohs’ qualities are mostly confined to its surfaces: its gameplay is by no means as engaging as the atmosphere the world evokes.

Later, though, Ancient Egypt takes things up a notch. Tucked away in the Valley of the Kings, I find the entrance to one of the oddest, but most enthralling locations I have seen in a videogame: Sekhet-Aaru. Thebes and its outskirts are one thing, but these Egyptian reed fields stop me dead in my tracks – well, perhaps that is a poor choice of words. Sekhet-Aaru is the afterlife in the Egyptian pantheon, a heavenly, Osiris-controlled reality in which human souls can exist pleasurably for eternity. The problem is in the game’s version of this location things have gone a bit wrong here, too. Horse-sized scorpions roam, waiting patiently for their prey – me – in the bright yellow reeds. Demons ride gargantuan galleons across dry land. It is a destination with a namesake that makes it worthy of being memorable.

Not only do your objectives fail to do this world, pulled from myth and history, justice, but they are also painfully dull. In the centre of Aaru is a temple where I must summon Nefertiti, the Great Royal Wife of the pharaoh, Akhenaten. Before I can get to her I have some surly priests to get past. Spoiled wine is contained in barrels along a snake-infested tunnel, they tell me, and so I need to destroy it before I can proceed with my mission. I smash them and return to the priests. Then I am to set some impure food ablaze aboard one of the physics-defying ships, and return to the priests again. This padding manages a quite spectacular feat: it makes massive scorpions and mythical ships boring.

If you are a die-hard Assassin’s Creed fan who lapped up the evolutions to the formula Origins delivered, The Curse of the Pharaohs is for you. For everyone else, it is entirely missable. Its world is beautiful and rich with history but when you really get down to it it is little more than extra progress bars and treasures to collect. If watching numbers tick upwards does not do it for you then all you will be left with is a tiresome slog through an attractive new slice of Ancient Egypt. Fast food is nice, certainly, but only when you don’t have too much of it.

Are you continuing your Assassin’s Creed Origins adventure with The Curse of the Pharaohs? Let us know in the comments below.

This feature was originally published on February 28, 2018. You can read more about Assassin’s Creed Origins here.