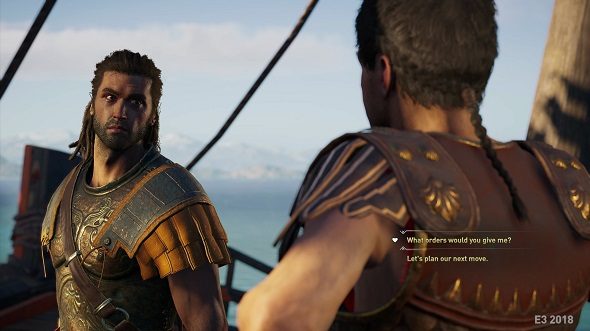 Play your cards right in Assassin’s Creed Odyssey and it looks like you can have a pet wolf follow you around. An ability list we saw at a demo of the game, which is set in Ancient Greece, references a skill called Beast Master.

The description of the Beast Master skill reads that it allows players to “tame knocked out wolves. Only one wild animal can be tamed at a time.” Now, we haven’t seen the skill in action, so can only guess at exactly what it does, but there are a few hints on offer. We know from a different ability, Arrow Master, that you can craft paralyzing arrows to knock out targets instead of killing them.

So that means you should be able to knock out the wolves with relative ease, and then you can tame one of them at a time. I’m gonna guess that offers access to some sort of MGSV-style D-Dog arrangement, in which you can direct your canine friend to attack certain targets.

However, I would suggest you’re not just limited to wolves – ‘Beast Master’ is pretty ambiguous, and the description of “wild animal” suggests there are other animals that can also be tamed. We know for a fact that there are, at the very least, sharks in Assassin’s Creed Odyssey, so maybe you can reign some animalistic terror at sea as well as on land.

Sadly, it seems your animal pals aren’t particularly hardy, as the implication that you can only recruit one at a time hints that they can probably die. That makes them a lot more fragile than your player-character, who can survive 30-foot drops without suffering any harm at all.

The Assassin’s Creed Odyssey release date is October 5, so you can head off to the Med and start taming some of the goodest boys Ancient Greece has to offer later this year.