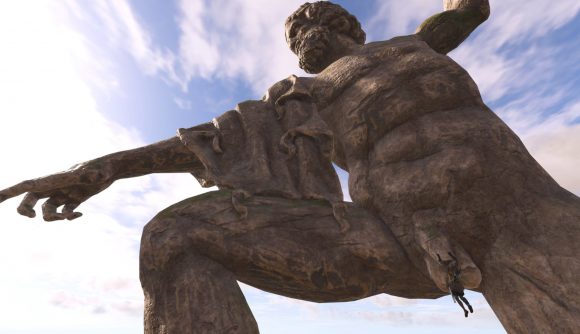 There have been a multitude of Assassin’s Creed games since the series began, and many of them let you climb things. Many of those things are appropriate for climbing, like trees and ladders. Some are things you definitely shouldn’t climb, like cathedrals and other historic sites. But no climbing option has ever been quite so inappropriate as Zeus’s penis.

Yes, you can climb a divine dong in Assassin’s Creed Odyssey, and it’s rock-hard, too – because it’s carved from stone. There’s a massive nude statue of the Greek god aiming lightning at the poor mortals down below, and as with all permanent erections in the world of AC, you can climb it.

In fact, you’re encouraged to, as the tip of Zeus’s lighting (the literal lightning, this one isn’t a euphemism) serves as a synchronization point. That means it doubles as a fast travel location, so you can quickly head back and put your hands all over the divine body whenever you want. Only to get a better vantage point to plan your next assassination, of course – like in the beautiful, cinematic shot above which comes via tortopor on Reddit.

In theory, you don’t have to touch the godly member, but Ubisoft knows what’s going to happen. Your character will react with mild collar-tugging when you start climbing in inappropriate areas, as you can see in the video below.

Of course, they had to record that line with multiple voice actors given the Odyssey gender choice – for the sake of completeness, here’s Kassandra’s read.

Ubisoft said there would be no nudity in Odyssey, but clearly they didn’t count any genital larger than a human. It’ll be interesting to see how this fits into the upcoming Discovery Tour – given that mode’s tendency toward censorship, Zeus is going to need a really big seashell to make this one education-friendly.