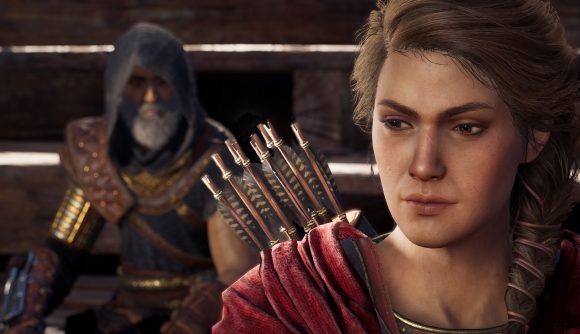 In June, Ubisoft began to address allegations of sexual misconduct and harassment at its worldwide studios. Now, a new report citing nearly 40 current and former Ubisoft employees has offered substantially more insight into the problems at the company, and the way those problems affected both workers and Ubisoft’s games.

Numerous Ubisoft executives have been accused of either direct harassment of female employees or fostering a ‘frat house’ mentality at the company. In a new report from Bloomberg, employees say Ubisoft executives held business meetings at strip clubs, encouraged heavy drinking, and made disparaging comments about female colleagues. Chief creative officer Serge Hascoët, who stepped down from the company earlier this month, is one of the principal people accused of creating this culture.

In early versions, Assassin’s Creed Odyssey was supposed to feature Kassandra as the sole protagonist, but devs were told that this was not an option – which is why we got the choice between Kassandra and Alexios.

Similarly, Assassin’s Creed Origins was originally set to feature Aya much more prominently as a playable character. The original version would’ve had Bayek dead early in the story, but devs were allegedly forced to give Aya a reduced role. A similar decision is said to have been made regarding the dual protagonists of Assassin’s Creed Syndicate.

In the wake of the report, other former Ubisoft employees have addressed on social media other instances where executives forced changes in an effort to make games more marketable. According to one former Assassin’s Creed writer, a member of Ubisoft’s editorial board insisted in one instance that “the protagonist must be a STRAIGHT WHITE ALPHA MALE”.

The gentleman from editorial said "the protagonist must be a STRAIGHT WHITE ALPHA MALE" and underlined it in red marker, stamping a foot, for emphasis. I was demoted over this issue, and quit. I trust this cannot be interpreted as "disparaging" since the studio was proud of it. https://t.co/PphYi94vxQ

In other instances, devs pushed back against inappropriate in-game content. An interactive torture scene in Splinter Cell Blacklist made it as far as motion capture before some developers successfully convinced the studio to remove it.

In other games, content including a dog fight minigame, Native American ‘spirit quests’, and rape scene integrated with controller vibrations were other points of contention.