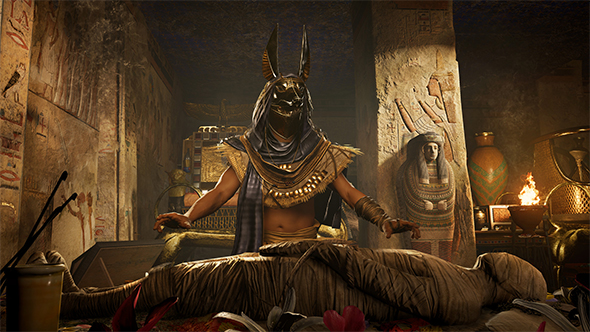 Update, November 27: Assassin’s Creed: Origins and other games are holding out against pirates far longer with the latest version of Denuvo.

The layers of piracy protection keeping Assassin’s Creed Origins from being cracked have been unpopular, but they’ve also worked. It’s been a month since the game’s release, and it still hasn’t been cracked, a notable delay considering Middle-earth: Shadow of War was pirated within 24 hours, and many other Denuvo-protected games have been broken into faster and faster.

That could be partly attributed to Ubisoft’s controversial decision to layer VMProtect on top of Denuvo, but as DSOGaming note that’s not the only factor at play. A new version of Denuvo was recently released, and it’s used in the protection of recent games like ACO, Sonic Forces, Football Manager 2018, Need for Speed Payback, and Star Wars Battlefront 2, none of which have yet been cracked.

Of course, there’s no reason to suspect these games won’t ever be cracked – there’s simply too much pride and skill in the illegal world of piracy – but Denuvo is continuing to do its job in protecting games over their critical early days. Even if there are still questions over whether piracy has a significant effect on game sales, many publishers will continue to do whatever it takes to protect their games from cracks for as long as possible.

Ubisoft have issued a statement saying that despite the two layers of anti-tamper technology included in Assassin’s Creed Origins, players shouldn’t be experiencing any impact on performance.

A Ubisoft spokesperson told us “We can confirm that the anti-tamper solutions implemented in the Windows PC version of Assassin’s Creed Origins have no perceptible effect on game performance. We’re committed to ensuring the most optimum experience possible for everyone, and we advise any players who may encounter performance issues on PC to check out support.ubi.com as there might be already a workaround, or to contact us further explaining their issues so that we can solve them.”

Update, November 1:Performance issues in Assassin’s Creed Origins might be caused by two layers of anti-piracy protection, one of which is activated every time you move your character.

Denuvo has been struggling to protect launch windows recently, as new strategies from groups of pirates have allowed them to circumvent the protection entirely, producing Denuvo-sanctioned keys to ‘trick’ the software into accepting counterfeit versions of the game. In order to help protect the game, it seems as though Ubisoft have added a second layer of protection – VMProtect was dropped by Denuvo earlier this year, but can be found in the Origins game files.

Anti-Tamper technology is unpopular as many users claim it slows down performance while offering minimal results in terms of protection. According to this Twitter thread and a couple of Reddit threads, however, the addition of a second form of protection is slowing the game down even further, causing significant performance issues on some machines. This is widely blamed on the fact that VMProtect is being called in every time the character moves, impacting performance every second.

Original story, October 30:Despite its use in a wide array of triple-A PC titles, the use of Denuvo Anti-Tamper software has remained a controversial topic. Initially far more effective than other forms of anti-piracy tech, it suffered from the start as various reports circulated regarding Denuvo’s effect on PC performance. Now similar reports suggest things have gotten especially bad with the latest Denuvo-protected game.

One crack group is suggesting that Assassin’s Creed Origins’ CPU usage has been increased by nearly 40%, as reported by DSOGaming. The group suggests that Ubisoft’s implementation of VMProtect over top of Denuvo is the reason for the abnormally high processor usage.

Our own performance report found Origins to be a very demanding game, but unfortunately it’s impossible to tell how much of that is due to the game itself and how much is due to its protection tech. Even cracked software continues to run Denuvo encryption in the background, making it impossible to tell how much performance issues are related to that software or to the game itself.

Take this report cautiously, particularly as it comes from a crack group, but even the suggestion of these issues is worrying. It’s become clear that Denuvo is no longer nearly so effective in combating piracy as it once was. Ubisoft’s past titles have typically included Denuvo even long after it had been initially cracked, so it’s unlikely to see a change in policy here.