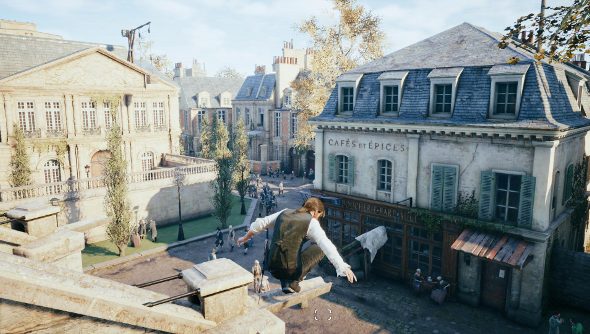 Fraser had a fiddle with Assassin’s Creed Unity PC port yesterday, and came away with a number of technical reservations about Ubisoft’s Parisian playground.

While the most dramatic framerate troughs have been reserved for consoles, PC players have discovered performance problems across a range of rigs. In fact, the only point of consistency seems to be that AMD users have had the worst of it.

Unity owners might already have noticed that Ubisoft Montreal have made special provision for NVIDIA cards – particularly when it comes to shadows and anti-aliasing. But AMD users haven’t been quite so well catered for.

The game’s performance has been “adversely affected” under certain AMD CPU and GPU configurations – and the fact has been brought to Ubisoft’s attention.

“This should not affect the vast majority of PC players,” wrote a community manager. “But rest assured that AMD and Ubisoft are continuing to work together closely to resolve the issue, and will provide more information as soon as it is available.”

The publisher’s team are “furiously working” to solve performance issues and bugs. They’ve actually set up a live blog to provide regular updates on what they’re up to. They’re first tackling the YouTube-famous glitches that’ve seen Arno falling through the ground and getting caught inside hay carts, poor chap.

Assassin’s Creed Unity was pulled from Steam last week. Have you bought it anyway?