I’m riding between a pair of looming black cliffs crowned by a castle, birdsong twittering around me. I’m chasing a phantasmal wolf over fog-shrouded hills. I'm duelling a Viking with a deathwish on Downpatrick Head as the sun sets over the sea. I'm stalking a deranged druid through a bog. I’m running across dazzling emerald hillsides beneath a rainbow conjured by a gentle rain, as a chirruping fox chases a pair of rabbits past my feet.

Like England in the base game, the Ireland that Assassin’s Creed Valhalla presents in its Wrath of the Druids expansion delivers dozens of thickly atmospheric experiences in a postcard-picture version of its setting. They come both in set pieces and organically, but regardless of how they occur your fingers will itch to book a flight to Ireland. As I said in our review of the base game, Valhalla is second only to Red Dead 2 in the heart-achingly beautiful and closely detailed open world it presents, and Wrath of the Druids maintains those high standards.

You’re invited to this enchanting land by a Persian merchant named Azar. She’s come on behalf of the king of Dublin, Eivor’s cousin Barid, who needs your help securing his throne. His plan is to impress the newly crowned High King Flann by developing Dublin into a hub of international trade.

Obviously, he needs your help with that, and building Dublin’s renown branches from the main story into one of the DLC’s few side quests. You do so by fulfilling trade contracts offered to you by Azar, who hooks you up with foreign kingdoms looking to sample the fruits of Ireland (furs, texts, luxuries, and ‘delicacies’ like mead and ale). 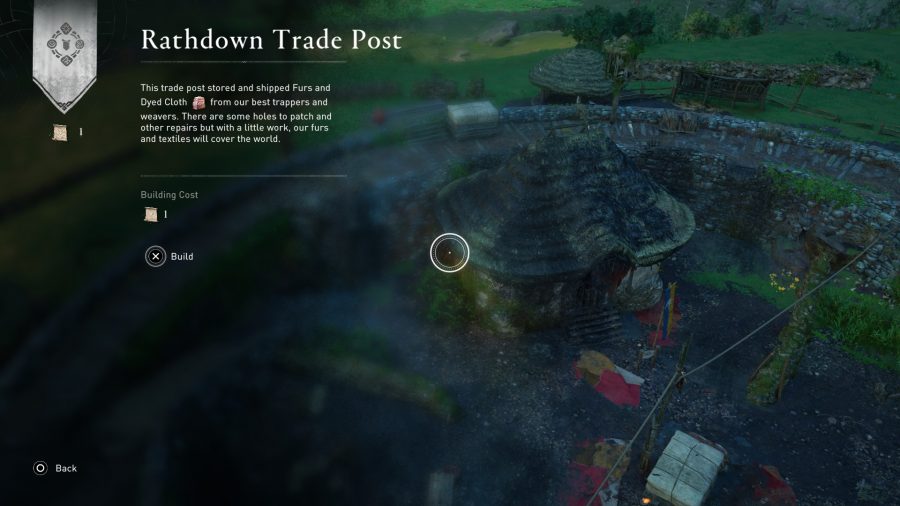 So in order to satisfy, say, the decadent Emperor Basil I of Constantinople, I schlep around the map clearing wolves and drunken Vikings out of Gaelic ringforts, which in this case are also trade posts. Then I need to find their ownership deeds, which usually means clearing out another camp. Trade posts then accrue goods over time, and I can speed this up by building a workers’ cottage there. Just as in the base game, I need to loot supplies from monasteries to build upgrades, though I do raise an eyebrow when the suggestion that I should knock over a church to improve my trade post comes not from a fellow Viking raider, but a local Irishman.

The story is brilliantly poised for drama, and the execution doesn't disappoint

As the goods stack up I return to Dublin periodically to fulfil Azar’s contracts, increasing the city’s renown and unlocking new trade destinations. The primary incentive for all of this is loot: each destination has a new armour set. Completing all the trade contracts in an area unlocks infinitely repeating quests that grant a trickle of silver and XP, which might prove useful for the rest of my game if I can tolerate the loading screens to swing by Dublin regularly, but otherwise there’s little long-term reward here. I do get to resolve Azar’s personal story arc, but her final mission is simple and ultimately anticlimactic.

Another low point comes in the royal demand missions, which represent Eivor’s efforts to win over the other petty kings of Ireland to Flann’s cause. They involve being sent somewhere to kill someone or pickpocket something, and play like Skyrim’s radiant quests: procedurally generated filler content. You can accept more of them as additional side quests if you wish, but their rewards are pointless, and as game experiences they offer nothing special. 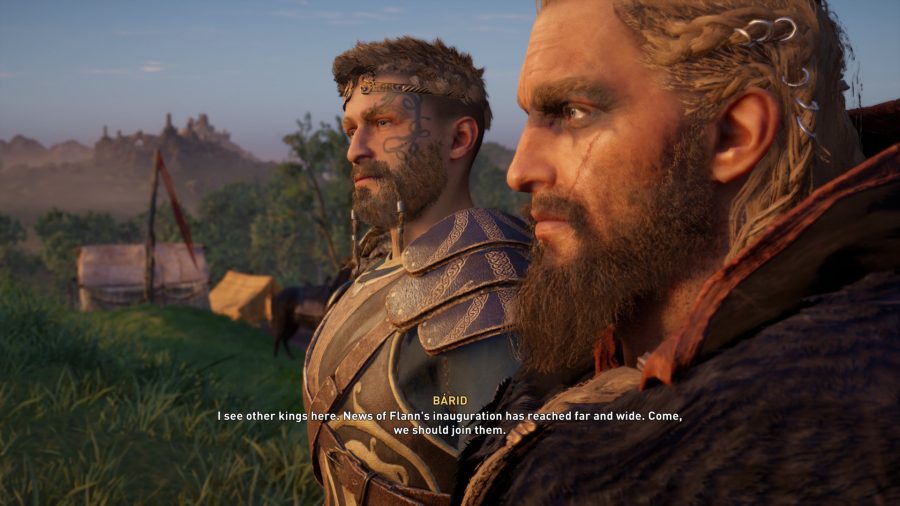 Fortunately, the main story is brilliant, and its characters far better handled than Azar. Barid, the reason for Eivor’s presence in Ireland, holds both the Christian God and the Norse gods close to his heart, and as such represents an ideal resolution to the story’s core conflict between traditional and new, foreign faiths. He’s immensely sympathetic for this, and for his embattled situation, being torn between High King Flann and his own headstrong son, who would rather he commit to his Norse roots.

I've spent 18 hours in Wrath of the Druids so far, and in that time I've finished the main quest, the Dubin renown and Children of Danu side quests, and tackled some of the most notable open-world activities including the new Drengr and a monster or two. I've still got a few more mysteries to complete and collectables to gather, but what remains feels more optional than essential.

The titular wrathful druids are the Children of Danu, an extremist sect of Ireland’s pagan culture who resent the creep of Christianity and involve themselves in its political and religious turmoil in ways that I won’t spoil. Representing the more benevolent pagans is Ciara, Ireland’s anointed bard, whose blessing King Flann seeks in order to represent his respect for ancient traditions. In him, Ciara hopes for a benevolent, pantheistic king.

As a set of premises it’s brilliantly poised for drama, and the execution doesn’t disappoint. It sometimes feels a little odd that Eivor should be so closely involved. All RPG games suffer to some extent from the absurdity of the player character being admitted to the highest circles of power and given every important task, but Wrath of the Druids doesn’t handle it as well as, say, The Witcher III, or even its own base game. 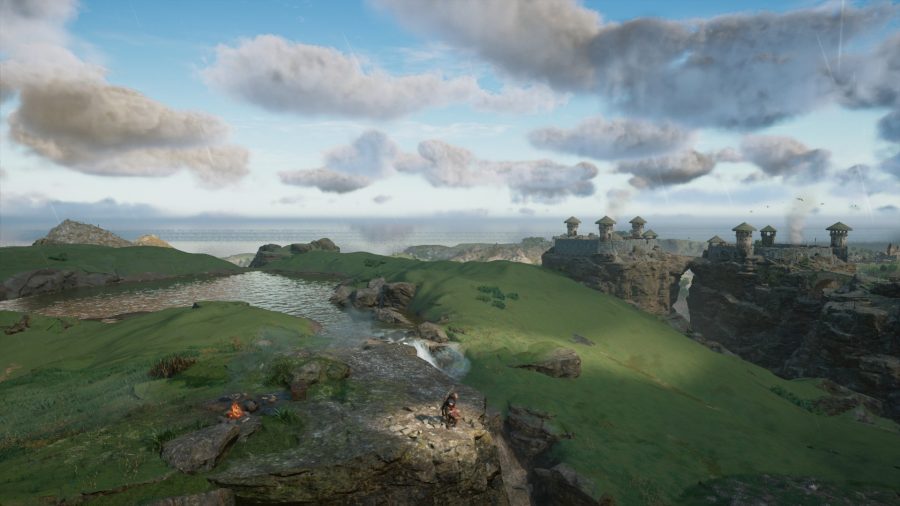 At least in England, Eivor is personally invested in building a life for their clan in England. Here, I occasionally find myself wondering why the High King of Ireland would entrust so much to a stranger when his distrusting nature is presented as his tragic flaw, and his treatment of Barid – the person vouching for Eivor – as the chief example of it.

There’s also a slight feeling of déja vu from the base game as another plot of kingmaking and alliance-building unfolds. But the stakes are sufficiently high, and there are enough exciting set pieces, the odd twist, and an explosive finale that puts a neat spin on the DLC’s title, to keep me happily entertained throughout its run.

So while its trading and royal demands side quests fell a bit flat for me, that’s easy to overlook. At its core, Wrath of the Druids is a meaty and engrossing story anchored by three brilliant characters and steeped in touching reverence for Ireland’s soul, while Ireland itself is another achingly pretty extension to Valhalla’s digital world. 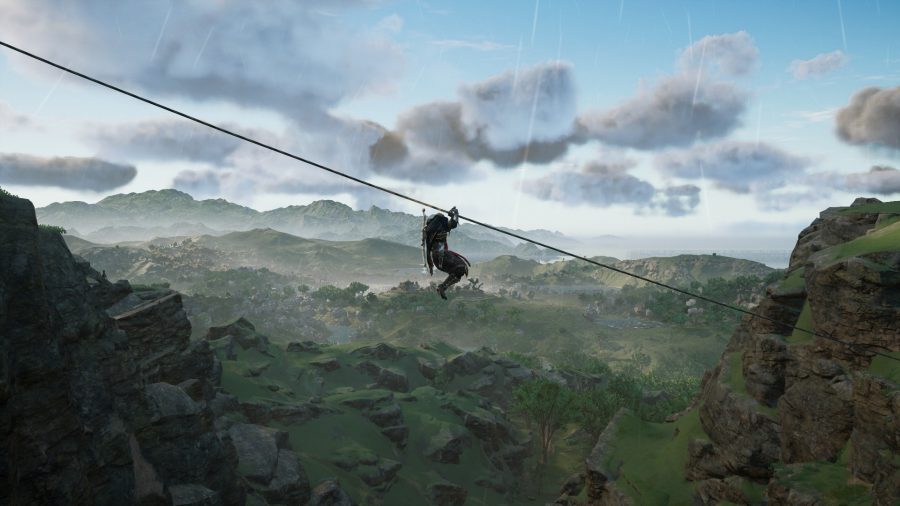 Some of the new loot and abilities are also a welcome enhancement to its gameplay: I enjoy the brilliantly unsubtle new Viking headbutt, and the fact that my summonable wolf now has an Irish wolfhound buddy to go mauling with. But your mileage on this may vary if you’re not interested in harvesting another cattle ranch’s worth of leather to upgrade a new gear set.

Wrath of the Druids is a tad familiar, but that’s a good thing when it offers more of what Valhalla did so well. I’m ready for something a little different from the Siege of Paris DLC, however.

If you still haven’t checked out the main game then you can buy Assassin’s Creed Valhalla here. We’ve also got a list of the best Viking games on PC if you’re looking for something a little different.

A hefty expansion that offers up to 20 more hours of what Valhalla does so brilliantly, slightly marred by some half-baked side quests.