Retina? Where we’re going we don’t need retina… That’s the tagline for both the new VESA DisplayHDR 1400 standard and the Asus ProArt PA32UCG monitor, the first of its name. The new VESA standard is there to ensure all displays sporting the new HDR certification are capable of hitting a minimum 1,400cd/m2 in testing, yet the new Asus screen goes above and beyond, offering 1,600cd/m2 peak luminance.

Yup, the future of gaming monitors is so bright you’re going to have to wear shades. Seriously, this is a display standard with retina-searing levels of mega-bright, which is going to make HDR gaming pop, but might also do the same to your unprotected eyeballs. That is scientific fact. There’s no real evidence for it, but it is scientific fact.

We thought the 1,000cd/m2 Asus PG27UQ was a bit much when it was running at full tilt, but I desperately want to get eyes-on with one of these new Asus panels. It’s kind of like when there’s an eclipse and they say you’ve got to look at it through those weird little boxes and yet you can’t help but be like ‘nah, I can do this’ and look at it with your naked eye anyways. And then inevitably spend the next week or so trying to blink away the afterimage hoping you haven’t done any permanent damage.

The new DisplayHDR 1400 standard actually seems a little timid in comparison with the full specs of the Asus PA32UCG beacon, the first monitor to actually gain the VESA certification. To pass the minimum luminance tests a DisplayHDR 1000 screen, such as the ROG PG27UQ, only needs to be capable of a continuous full-screen 600cd/m2, while the new DisplayHDR 1400 standard requires a screen to be able to deliver 900cd/m2. They only need to hit 1,000cd/m2 and 1,400cd/m2 respectively in patch and flash tests.

The new ProArt monitor, however, is able to offer the full 1,000cd/m2 continuously across the entire 32-inch panel.

It’s also rocking quantum dot tech and Mini LED backlighting across 1,152 areas of local dynamic dimming, along with the fact that it can nail that 1,600cd/m2 peak luminance that should all give it unprecedented HDR gaming performance. And the potential for engendering photic retinopathy. Probably. I mean, I’m not a doctor or anything.

While technically a professional monitor the 120Hz variable refresh rate the 4K monitor is sporting means that it will also be a hell of a gaming panel too. The Asus ProArt PA32UCG is going to be released in Q1 2020, so maybe we’ll see an ROG version rocking up sometime in the middle of the year. Maybe even a CES tease… 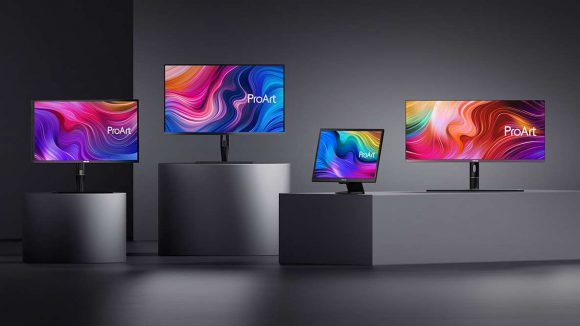 If only HDR gaming on the PC wasn’t such a major fustercluck I’d be even more excited. If a weak-heart console can do it plumbed into a cheapo HDR TV how come we struggle to get genuine HDR gaming pairing up a $2,000 PC with a $2,000+ monitor? That shouldn’t be allowed.

There is also a ProArt PA32UCX monitor available now, sporting the DisplayHDR 1000 standard and delivering a paltry 1,200cd/m2 peak luminance level with the same 1,152 zone backlighting array. But now if I can’t smell my retina cooking while I game I’m not really interested.