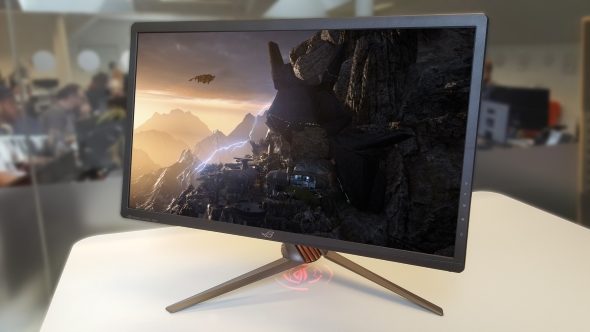 It’s been a long time coming, but finally the 4K Nvidia G-Sync HDR screens are here, and the Asus ROG Swift PG27UQ is the first to land on our test bench. And it’s landed with a thud because it’s chunky chassis is about as weighty as its $2,000 / £2,300 price tag.

We first saw the promise of 4K HDR gaming at CES some 18 months ago, back when this monitor was initially unveiled. And then, at every Asus, Acer, and Nvidia event since, the ROG and Predator screens have been wheeled out time and again to blind onlookers with their 1,000 cd/m2 peak luminance.

If you want the top screen then you need to check out our list of the best gaming monitors to buy right now.

And the promise seems obvious; to be able to bring the same fluid fidelity to 4K gaming as we’ve had with our 144Hz 1440p G-Sync screens for years, but with the added gloss and glamour of high-dynamic range visuals. But for that you need a high-end panel, powerful internals, and a serious graphics card to boot, which is why it’s taken so long to arrive. Oh, and you need big pockets. Really, really big pockets.

Yeah, it’s hard to get around the fact that the Asus PG27UQ costs more than most of our gaming rigs, and it’s also going to be difficult to parse the fact it’s also a lot pricier than some of the best big-screen HDR TVs we can decorate our living rooms with too. But this is the lot of the early adopter, and no matter what’s going on in console land, with the Xbox One X or the PS4 Pro, the PC is well behind the game on high-dynamic range gaming.

We’re still in the infancy, the terrible twos of HDR on the PC, so when Nvidia, Asus, and Acer get together with a panel manufacturer to push it on to the next level, the first iteration of products are always going to bear the brunt of their shared development costs.

But the Asus ROG Swift PG27UQ is most definitely a next-generation monitor. These displays represent the first panels to be able to offer 4K G-Sync compatibility with 144Hz refresh rates, and the first to really deliver on the full 1,000 cd/m2 peak luminance that makes true HDR content really shine and/or blind.

The AU Optronics screen inside both the Acer and this Asus monitor uses an AHVA panel, which is IPS by any other name. It’s a 27-inch screen, with a native 3840 x 2160 resolution, and has a top refresh rate of 144Hz. The big news, however, is the fact that it can game at that level with HDR enabled, with the 384-zone full array backlighting offering the ability for it to display the brightest and darkest tones of an images side-by-side. And I noticed none of the tell-tale backlight bleed that I noticed on the early BFGD prototypes I had the chance to play with at CES in January. 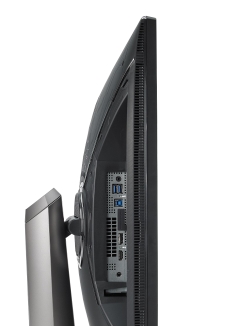 The luminance levels of the new monitor are what really highlights the difference in the screen’s representation of dark and light. Its typical, non-HDR brightness level is a pretty standard 300 cd/m2, while with HDR enabled that doubles to 600 cd/m2. But that’s just its typical level – the PG27UQ is able to hit a maximum of 1,000 cd/m2, which is pretty damned sparkly.

As for the design of the PG27UQ, it’s… classically ROG. And by that I mean we’re not talking about the clean, grown up look of Asus’ lovely ProArt PA32U, we’re talking overblown LEDs, a chunky bezel and a broad, stylised base. It’s even got its own ROG-based bat signal beaming out of the top of the stand. Asus does try to justify the fugly, inch-thick bezel surrounding the screen by suggesting that, as you’d never use it in a dual-monitor setup, it doesn’t need to have a thin frame.

“The Swift PG27UQ is designed to be enjoyed as a single monitor,” says the Asus reviewer’s guide, “and as such, it does not feature ultra-thin bezels.”

Because, with only one monitor on your desktop, if you didhave ultra-thin bezels you just wouldn’t know where the screen stopped and the real-world began. Obvs. It’s just so much bovine excrement from the marketing department of Asus I’d find it offensive if it wasn’t so transparent and borderline hilarious.

Aesthetics are one thing, but if the image on screen is arresting enough you won’t need to be looking outside of the window onto your chosen game world. And the Asus ROG Swift PG27UQ can certainly deliver an arresting image… when you can get HDR to work. With HDR enabled compatible video content looks absolutely stunning, better than I’ve seen on any PC monitor in my life. It’s almost up there with the image you get on an LG OLED panel. Almost. 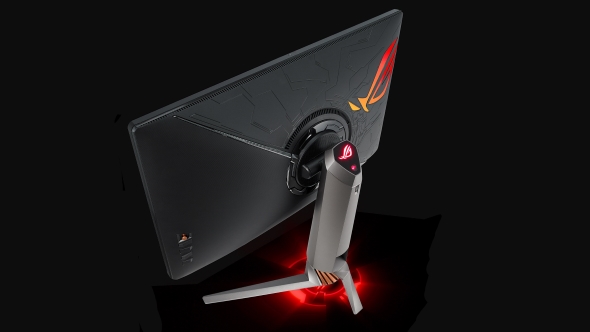 And with a decent HDR-enabled game, such as Resident Evil 7, Mass Effect: Andromeda, and Hitman (to name the few), you get a gaming experience that’s more visually appealing than all the adorable kitteh pictures on the world wide web. The colour representation of the panel, the extreme levels of luminance it can offer, and the glorious smooth motion that a G-Sync module can deliver at 144Hz all combine to deliver unprecedented visual fidelity.

Of course you need some serious hardware to drive such a panel at 4K, and at the necessary speed to take advantage of that refresh rate, which is possibly one of the reasons no-one involved really felt a keen impetus to get these displays released when they were meant to – i.e. this time last year. A card capable of such a feat, the GTX 1080 Ti, would have cost you about half the price of this monitor last year.

But the panel is definitely not perfect. As bright, and as colourful as it is, it’s not actually that accurate when it comes to its contrast and black levels. Because it’s an IPS-a-like display it suffers from the typically weak black levels of that technology, and that affects its ability to perfectly display equal fidelity at the very darkest tones in an image. It’s such a high level of contrast, and not the headline-grabbing levels of peak luminance, that makes OLED such a fantastic alternative choice for HDR. There is also some definite visual banding evident in some of the gradients. It’s sometimes very slight, but the panel doesn’t always deliver a smooth gradation of colour.

That means the PG27UQ can deliver on the bright, vivid colours of a high-dynamic range image, but it does struggle at the bottom and top ends of the tonal spectrum. When it’s displaying a particularly dark image, such as in Resi 7, you get great pin-sharp points of light in the darkness, but there’s little definition to the different shades of grey surrounding them. And that’s supposed to be the hallmark of really good HDR.

The panel does actually still look fantastic outside of HDR, however, despite my misgivings about the panel quality. The ability to also deliver a wide colour gamut on SDR content means that even when you’re not basking in high-dynamic range gaming visuals the PG27UQ is able to shine. On the desktop… well, not so much. It’s fine but there are some strange halos around text which look a little odd, though that could just be because of Windows scaling with a 4K display.

Which brings me on to another issue I have, the size. At 27-inches it still feels just too small to really give you the goods at the 4K resolution. It means you really need to get Windows scaling on the case and that’s rarely a good thing. I’m not saying I need a Big Format Gaming Display, or GTFO, but a 30-inch panel is still my minimum for making 4K look its best, and ideally a 40-inch screen.

And that’s the scale of panel I want when I’m paying two grand for a monitor. Not that I’m paying two grand for a monitor, I have no spare kidneys to auction in exchange for one. And there’s also no way I could genuinely recommend anyone else does either. Normally this would be where I suggest that of any component or peripheral your gaming panel should be where you’re justified in spending big money as it will generally last beyond your current system, and potentially your next. But with the PG27UQ I’m not sure that will be the case.

Sure, it’s 4K, and it is capable of delivering HDR gaming at 144Hz, but it definitely feels like the first generation of 4K HDR PC gaming, and I’ve got to hope the next generation will surely improve on it. And potentially improve on it by a lot. I’m sure this time next year there will be better 4K G-Sync HDR screens on sale for half the price of this display. 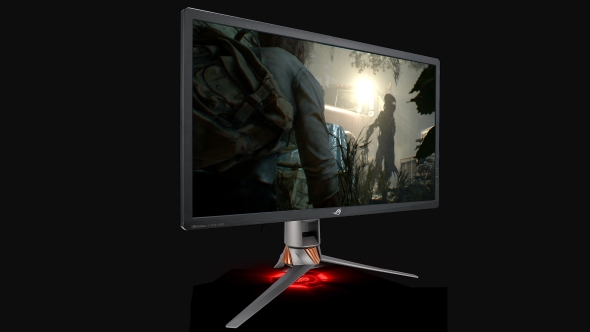 We’re also still at the point where HDR gaming content is limited, to say the least. You can demo how good your panel is with some nifty free video downloads, but there are precious few games which really utilise it. Resi 7 looks pretty good / horrifying in HDR, and Mass Effect: Andromeda is pretty enough that you can ignore the paper-thin character depth and jingoistic gameplay for a little while, but there is a real dearth of games that are actively improved with HDR.

And it’s often a pain to get working too, but that’s a problem with the muddled ecosystem, not the Asus hardware. Though it does make it almost impossible to recommend getting on the HDR bandwagon just yet.

I’m glad the Asus PG27UQ exists, and has finally been launched, but mostly because it means the next-generation of 4K G-Sync HDR will come all the sooner, not because it’s the ultimate, money-no-object gaming monitor we’d hoped for.