This review has me feeling rather conflicted. On the one hand I really like the styling and build quality of Asus’ Strix range of motherboards, and on the other Intel have really violated the poodle on the Coffee Lake chipset launch as a whole.

Want to know what chip to drop in your board? Check out our pick of the best CPUs for gaming.

These H370 boards were meant to be the mainstream, affordable mobos for the 8th Gen CPUs, but with Z370 getting on a bit now you can find cheaper high-end boards than the sort of high-end H370 Asus are filling their Republic of Gamers range with. Of course, the gorgeous-looking Strix Z370-E Gaming is only £40 more than this lower-spec H370 version, but when you can pick up a Z370 board, which can easily outperform this Strix, for much less it becomes very difficult to recommend the slower board.

We’ve already checked out the Gigabyte H370 Aorus Gaming 3 board, and that’s a quality H370, with an incredibly similar feature list and specs sheet, but even that lower-priced mobo has a lot of difficulty justifying its price in this tough market.

But there are definite areas where the Strix is lacking. The Gigabyte board reinforced both PCIe x16 sockets, as well as the DIMM slots, while this Asus board has only offered any protection to the primary PCIe connection. Like the Aorus the Strix has a wee shield/cooling plate for your toasty M.2 drive, but unlike the Aorus board it’s been placed over the secondary slot out-of-the-box.

I was wondering why the Samsung 960 EVO SSD’s performance was so much lower, and it’s because the covered slot is only running at x2 speeds rather than the PCIe x4 speeds of the M.2 socket at the edge of the board. 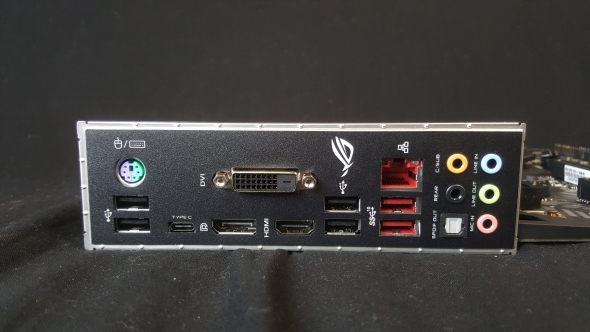 But stylistically this Asus board looks great. The PCB is smart and stenciled and it has a more packaged, productised aesthetic that makes it feel less of a set of plugs and more like a desirable component. I especially like the dark, brushed metal of the SSD, power, and chipset heatsinks. The surround of the I/O connections is neat too, and the connected I/O shield is a great idea, and I find it strange more motherboards don’t ship like this.

In performance terms, though, it’s difficult to get too excited about the board. For the extra expense over Gigabyte’s H370 Aorus you still get the same level of gaming speed, even if you do get a modicum of extra CPU power. It’s so slight, though, that it’s in no way noticeable. 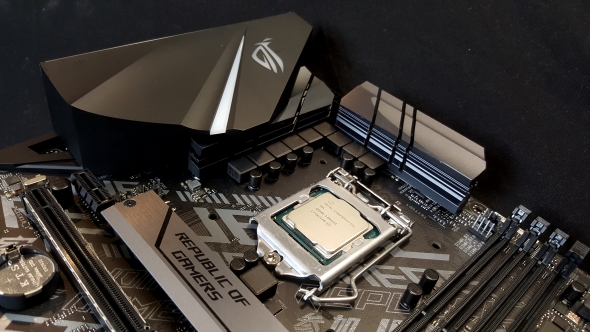 Quite simply, there are boards which are either as good, or better, and they’re available for less cash.

So, how does a manufacturer maintain margins on mainstream boards when the top-tier ones have had to have their prices slashed to maintain interest in the platform six months after release? This is the problem the mobo makers are facing and it’s a problem entirely of Intel’s making. If, as was traditionally the case, the Coffee Lake chips launched with the high-end as well as the mainstream motherboard chipsets then there wouldn’t have been this issue.

The manufacturers, in the absence of low-cost H370 and B360 chipsets, made low-cost Z370 boards. Those are still around and still outperform the newer, sometimes pricier options. And how could you recommend a gamer spend more on a lower-end board, which has weaker performance, just for the promise of native USB 3.1 Gen2? Sadly, for Asus, you can’t.