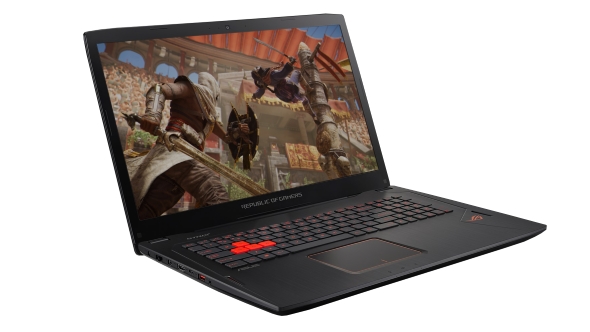 Have to say, I genuinely don’t understand the day-glo orange highlights Asus have used with their GTX 1070-powered STRIX laptop, but there’s no getting away from the fact it produces gaming performance almost alongside its far more expensive Asus Zephyrus sibling, and for $1,000 less.

A gaming laptop needs a quality rodent companion, so check out our pick of the best gaming mice around.

Seriously, the $1,670 (£1,749) STRIX GL702VS looks like some mid-nineties throwback got busy with a paint-marker in the Asus factory, tagging all the laptops with a retina-searing orange eye. And those bright WSAD keys… gracious. It’s all rather incongruous given the usual Republic of Gamers red, but it’s certainly eye-catching, even if it only has your eyes catching on fire.

Thankfully there is more aesthetically pleasing Armor Titanium version, so you don’t have to go for the bizarre-looking Myst Black design.

But still Asus have managed to squeeze some serious gaming hardware inside the mobile chassis. In fact they’ve been able to get a level of componentry inside the STRIX that enables it to run its GTX 1070 graphics card at speeds which allows it to almost keep pace with a GTX 1080 Max-Q design card, clocked down as they are to fit in more svelte laptop confines.

Along with the full-fat GTX 1070, with 8GB of video memory, you get a Kaby Lake Core i7 7700HQ processor, running at a decent 3.4GHz under load. The standard version of the card comes with 16GB of DDR4, though bizarrely our version came kitted out with 24GB. In terms of storage you get a 256GB Micron M.2 SSD for your OS and most oft-used games, with a 1TB spinning platter as a hard drive backup.

You also get a lovely 17.3-inch IPS panel, with a 120Hz refresh and G-Sync compatibility. That offers both a great picture and, because it’s still only running at a native 1080p resolution, the GTX 1070 is able to deliver excellent gaming performance even at the highest graphical settings. 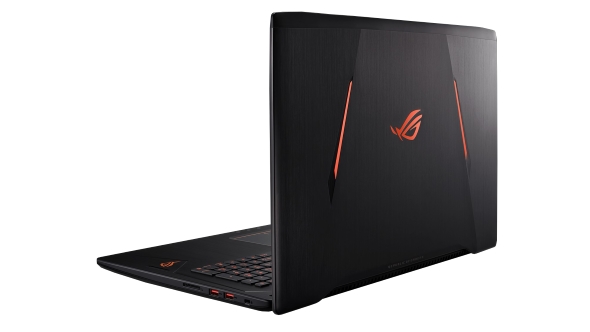 It’s really only the brutal Total War: Attila which gives the STRIX GL702VS any pause for concern on the gaming front. But then that’s the same no matter what GPU you’re passing its graphical data through. When it comes to Rise of the Tomb Raider it blitzes through the benchmark at 93fps and hits 115fps in Grand Theft Auto V.

These numbers on their own look pretty impressive, but even more so when you put them up against its far more expensive Zephyrus stablemate. The beautiful, slimline Zephyrus is the faster machine, and genuinely far better-looking, but not by enough to justify the extra £1000+ Asus want you to spend on it. It’s only ever between 4 and 9% faster in-game, and only delivers an extra 7% synthetic performance when you fire 3DMark its way.

But the Zephyrus is all about offering its gaming performance in a chassis that is only 17mm thick. Take one look at the 30mm thick STRIX and you can see a visit to Weight Watchers has not been a priority for this porker. Sorry, as another one of the corpulent I shouldn’t cast such aspersions on others, and it’s not really that fat. But you know how you never like standing right next to your thinner, better-looking friends? Yeah, it’s kind of like that for the STRIX – the Zephyrus just makes it look even more chubby. Kinda like when I do a video stood next to our Jacob.

What that chassis does do for the STRIX, however, is allow Asus to use that full-power GTX 1070 without worrying overmuch about the thermal performance. Even when fully stressed neither the CPU or GPU heat up to such an extent that the STRIX ever needs to get anywhere near audible in terms of its cooling fans. Sure, if you strain your ears you can hear it once it starts getting over 75°C, but the tone is low and rather unobtrusive. 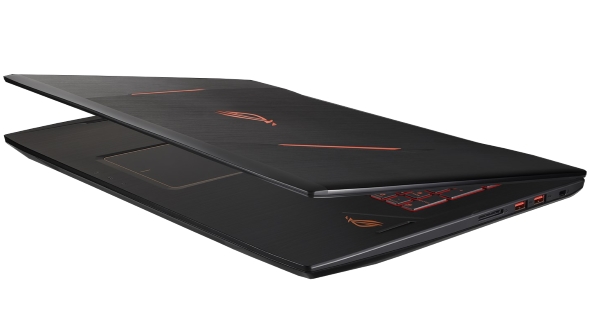 Asus are even using the same chassis for the STRIX GL702ZC, the ROG laptop using a desktop Ryzen 7 1700 CPU and RX 580 graphics chip.

The chunky chassis then is a sensible choice. While that doesn’t necessarily make the STRIX a particularly sexy looking machine, it does make it a desirable one from the point of view of thermals, aurals, and gaming performance. Asus have been smart in putting together the STRIX; it’s got a great mix of components, a decent price, and performs like an understated hero.