The Asus Zephyrus was used as the poster child for Nvidia’s Max-Q design when they first launched the initiative at Computex this summer. When I laid eyes on the skinny Asus notebook back in Taiwan, I was rather taken with it. The more I’ve come to use it, however, the more I’ve come to realise that it’s simply not a gaming ‘laptop.’

Forget the trackpad, this is a machine that needs a mouse. Check out our pick of the best gaming mice around.

That’s not to say the Zephryus isn’t adept at the ol’ gamey framey ratey stuff, with the combination of GTX 1080 and 1080p G-Sync panel you get exceptional gaming performance, capable of complementing the 120Hz refresh rate of the machine’s display. What you can’t really do is use it away from the desktop – you’re never really going to be able to game using the Zephyrus on your lap.

This is every inch a desktop replacement machine, like the monstrous, knee-breaking machines you’ll get from Eurocom or Clevo’d rigs from system integrators.

One of the big problems is that funky – but nerve-shreddingly flimsy – vent that deploys when you lift the lid of the Zephyrus. In order to keep the GTX 1080 Max-Q cooled sufficiently in such a slimline, 17mm thick chassis, Asus have had to get creative with the thermal design. To that end, a large panel drops down from the underside of the machine to enhance the GPU and CPU cooling.

This Active Aerodynamic System (AAS) delivers an estimated 32% increase in airflow, which Asus say is able to reduce the total system temperature by an impressive 20%. That means you don’t get the level of throttling you might expect from a svelte gaming notebook, the sort of throttling which held back the Razer Blade’s GTX 1060.

But because the vent is so thin there’s a huge amount of flex to it, so when it’s sat on your lap there’s the horrible sound of warping plastic every time you shift your legs. That doesn’t really give a particularly ‘premium’ experience from your nigh-on $3,000 notebook.

Due to the cooling system, Asus have also shifted the keyboard and trackpad layouts. They’ve brought the keys down to the front of the machine to leave space above the CPU and GPU components, allowing them to draw the maximum amount of air through the top to exhaust through the sides and back of the vent.

That means the trackpad has been shifted over to the side, doubles as a numpad, and has been turned on its side into a sort of portrait mode. Thankfully, it’s responsive and accurate enough for that not to be an issue – you can sweep from side to side on the 1080p display with one sweep of the pad.

But the placement of the keys means there’s nowhere to rest your hands while gaming or typing, so Asus have put a rubber wrist rest into the box to sit in front of your machine. That only works when it’s on a desk, though, because there’s no way to attach it. It feels like a bit of an afterthought: something created as a short notice solution to a design issue that didn’t crop up until too late. It’s certainly nothing like the stunning wrist rest Razer have recently delivered – that thing’s like a deluxe La-Z-Boy for your paws.

Despite the Max-Q efficiency you’re also only getting just over an hour of 3D gaming away from the plug socket, too. The GPU locks down at 1,000MHz and we measured just 65 minutes running the intensive Heaven benchmark on loop.

But, once you alter your thinking, and look at the Zephyrus as more of a small form factor gaming machine, or as a desktop replacement PC, then it comes into its own. The Max-Q design GTX 1080 performs only a little slower than the full-fat desktop version, and is impressively quiet even when running at full chat. 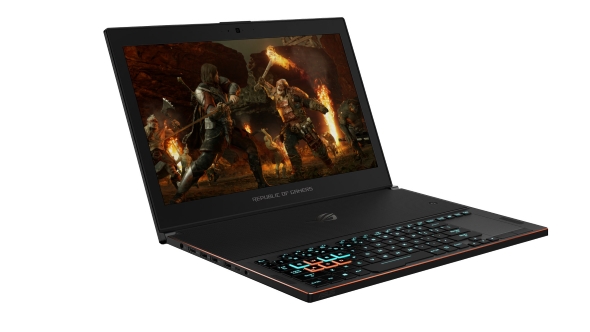 The standard mobile GTX 1080 has a boost frequency of 1,733MHz, while the Max-Q version is limited to 1,468MHz. That allows the GPU at the heart of the Zephyrus to manage both its thermal levels and power draw to a level, which keeps the machine unobtrusive and energy efficient, too.

The Core i7 7700HQ they’ve used is a quad-core / eight-thread mobile chip that’s almost at the top of the Intel tech tree, at least until the Coffee Lake mobile CPUs launch next year. Thanks to the level of cooling afforded the processor the Zephyrus is able to give the chip full rein to perform at its best.

And that screen is beautiful, too. It’s a 120Hz IPS, G-Sync panel that delivers games fluidly and with a vibrancy you don’t get on a lot of gaming laptops.

So, when you look at it with that framing, the Zephyrus makes for a really good-looking, powerful desktop replacement gaming rig. The gaming performance is on-point, the screen looks lovely, and it’s a lot quieter than most desktop PCs. But it ain’t no laptop. Realistically, this is a machine you’re never going to balance on your knees, or sit on the sofa with while you’re gaming. Its thermally conscious design almost entirely prohibits it.