Asus have announced the follow-up to their high-end Zephyrus laptop range, the Zephyrus M GM501. Despite the original Zephyrus acting as the poster child for Nvidia’s Max-Q graphics tech last year, Asus have ditched the green team’s power-limited GPUs with their latest laptop.

Want the very best gaming mouse of 2018? Look no further.

Asus announced their latest Zephyrus model alongside the brand-new Intel Coffee Lake chips. They’ve not opted for the flashy new mobile i9 chip, but rather the far more reasonable i7 8750H that will turbo boost up to 3.9GHz on all cores. From what we’ve seen so far of the new six-core mobile chips with the Gigabyte Aero 15W, those extra two cores haven’t been particularly noteworthy in gaming benchmarks, but I’m told gaming isn’t everything.

The biggest change in component for us gamers, however, is the omission of an Nvidia Max-Q GPU. Rather than the cut-down Max-Q GTX 1080, Asus have instead opted for an uncut GTX 1070 – which should be able to trade blows with the higher spec Max-Q chip. This change seems to have been at the expense of a few millimetres – bringing the overall thickness to 19.9mm.

The goal for Max-Q was to cut down the size of the considerable large and weighty gaming laptops currently on the market with the original Zephyrus rolled out as one of the earliest display models demonstrating the tech. 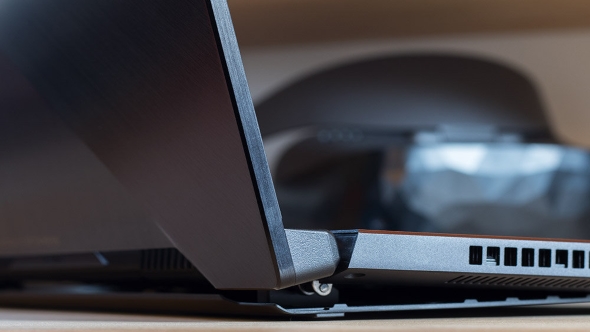 Despite Max-Q getting struck off the agenda, Asus seem to have learnt a few good skills from their venture into the ultrathin gaming market. First up, the AAS system – which allows the underside of the laptop to open to increase airflow – is still in place.

In our initial review of the Asus Zephyrus GX501, we were a little put-off by the thin plastic that made up the panel on the underside of the laptop. This easily flexed under any pressure while in the open position, and this made it exceptionally tricky to operate on your lap. The Zephyrus M, however, has instead opted for a shorter and sturdier panel that opens a few millimetres wider.

The trackpad and keyboard have also seen improvements with the Zephyrus M. The keyboard is no longer pushed forward, and the trackpad has returned to where you might expect it to be: front and centre. This also means the awkward lap experience is gone and the wrist rest included with the original Zephyrus to solve the awkward typing experience is now surplus to requirement.

The 1080p G-Sync display has also seen a bump from 120Hz to 144Hz with the Zephyrus M and the SSD has dropped from 512GB to 256GB. Most of the other features remain relatively similar to those found on the original model. Oh, except the price, because the Zephyrus M is actually considerably cheaper at $2,199 than the original Zephyrus that launched at a whopping $2,700.

Not only has the Asus Zephyrus M ditched the Max-Q design, but the Gigabyte Aero 15W, with its similarly slimline design, also opted for a full fat GTX 1060 GPU. Max-Q has certainly inspired various manufacturers to put their gaming laptops on a diet and drop a few pounds, but it will be interesting to see if more laptops arrive in 2018 that are teetering on the edge of Max-Q and looking to secure the sweet spot for portability and performance without the help of Nvidia’s tech.