The world’s fastest laptop was unveiled at the monstrous IFA show in Berlin; an Asus mobile workstation rig powered by the Nvidia Quadro RTX 6000 graphics card. The mobile workstation market isn’t normally something we’d spend too much time fussing with here on PCGamesN – we traditionally leave that to our alternative reality brethren over at PCWorkstationN – but the new Asus ProArt StudioBook One features a revolutionary design which could change the face of high-powered gaming laptops.

The Asus ProArt StudioBook features Nvidia’s Ace reference design with the goal of achieving what it calls ‘extreme performance’ in a sleek 15-inch form factor, and it does that by flipping the traditional laptop design on its head. Essentially all the super-heated, high-power components are shifted into the chassis behind the screen rather than below the keyboard, cooled by a pair of titanium vapour chambers.

This keeps the machine looking slim on the desktop, and cool enough on the lap that it won’t burn through the tight-fit, above-the-ankle trousers (pants) you have to wear if you’re a designer.

And the fact those twin titanium vapour chambers can cool 300W of power in a 25mm Z-height form factor means that you could jam an Nvidia RTX 2080 Ti into another notebook using the Ace reference design and create the world’s fastest gaming laptop. To be fair you could jam the Titan RTX into one and go HAM, because that’s a GPU with the same specs list as the Quadro RTX 6000 Asus has actually packed into the ProArt StudioBook.

The Quadro RTX 6000 uses the same TU102 GPU as both the Titan RTX and RTX 2080 Ti. It has the same core configuration as the Titan card, with 4,608 CUDA cores, 576 Tensor cores and 72 RT cores. It’s also got 24GB of GDDR6 video memory and more ray tracing juice than anything with the GeForce branding. 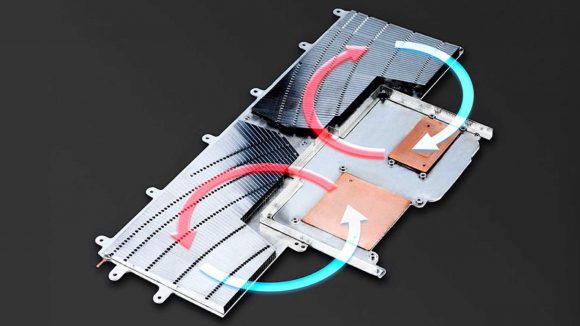 But by flipping the traditional laptop design Asus has been able to keep all the heat-generating components as far away from the user as possible, ensuring no singed leg hair from underneath of burned-off fingerprints on the top side. Obviously that’s going to make it a little top-heavy, so the act of actually balancing it on your lap might well be utter folly…

It’s not all one-way traffic on the design front, however, as Asus has also borrowed a little from existing ROG gaming laptops, taking the idea of the hinged vent from the original Zephyrus laptop and applying it to the lid of the StudioBook One. When it’s opened the outer cover of the lid automatically opens to allow for greater cooling. 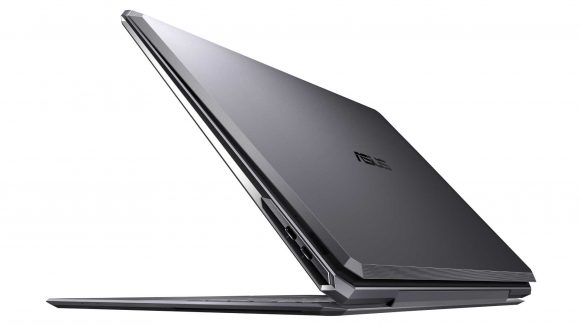 The innovative chassis design makes a whole lot of sense for a mobile workstation machine, and if you were looking to take the most powerful gaming GPU around at build a notebook around it the StudioBook One layout would be a smart way to go.

At the moment the RTX 2080 is the most powerful notebook gaming graphics card you can find, but by switching things around Asus and Nvidia might have found a way to up their mobile game.