Wireless options aren’t particularly popular when hunting for the best gaming keyboard, with many put off by the high latency of Bluetooth and low battery life. The Asus ROG Claymore II quells these concerns with zero compromises and even sprinkles in a few extra features for good measure, but like its wired predecessor, it comes with a hefty price tag.

In case you missed the original, it received a great deal of praise thanks to its detachable numpad, letting you assume a tenkeyless (TKL) layout to free up space on the best gaming desk, or slap it back on when you’re playing key-heavy games. That signature feature returns in the ROG Claymore II, alongside the new addition of a detachable wrist rest for increased comfort.

Costing £249.99, the ROG Claymore II is vying for a clutter free spot on your desk against rivals such as Razer’s $229 / £230 BlackWidow V3 Pro and Logitech’s $249 / £210 G915 Lightspeed. And, much like its competitors, it does away with the Cherry MX switches found in the first Claymore in favour of its own ROG optical linear Reds or clicky Blues.

The Claymore II ships disassembled with a USB Type-C cable for charging, but don’t worry if you’re not running the best gaming motherboard with the latest port, as Asus includes a Type-A adaptor. There’s also a USB Type-A passthrough to connect pen drives, the best gaming headset, or your wired mouse, although this only works when you plug the Claymore II in. 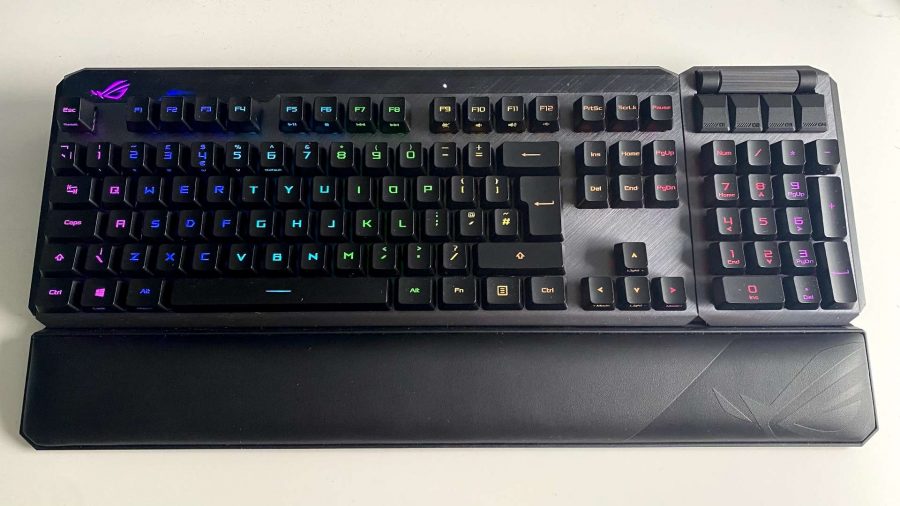 Much like its predecessor, the latest model certainly looks like an expensive keyboard, with a brushed aluminium top plate, next to no flex in the board itself, and generously-padded detachable leatherette wrist rest.

The numpad slots securely onto the main keyboard, and adds a textured metal volume slider and four programmable keys, set to control media playback by default. These are just macros you can change to perform just about any action, though. And if you don’t fancy the full whack, you can still use multimedia controls through the Fn key in its 80% form, although I found this much less comfortable. 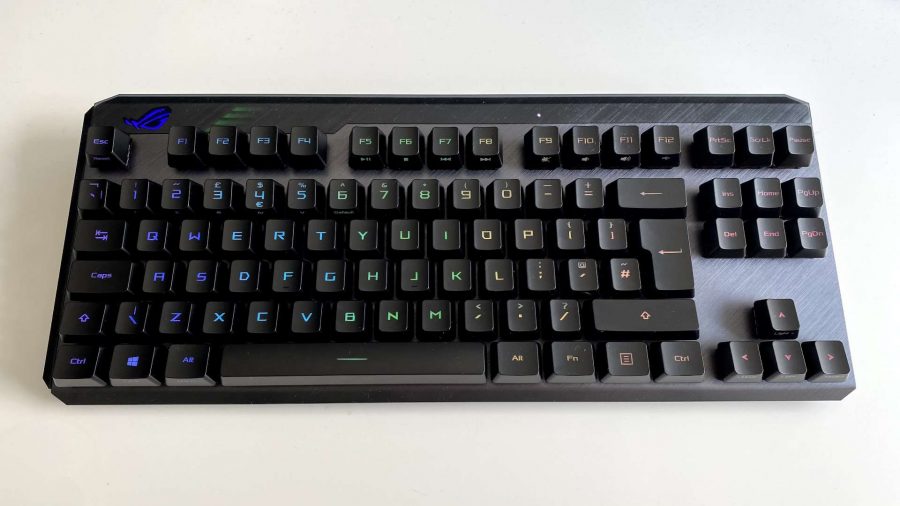 The per-key RGB lighting shines brightly even when my room is filled with sunlight, which is something that can’t be said about many other boards. The ROG logo in the top left also gleams, while a helpful four-bar battery indicator sits next to it. You can change these to just about any colour, but the battery indicator will glow red when it needs charging.

You’ll need the ROG Armoury software to make the most out of the Claymore II, as this is where you’ll set your RGB colours, reprogram keys, set power saving options to increase battery life, and create keyboard profiles for specific games. The colour customisation is fantastic, with the ability to create your own layouts or select from 10 effects, such as a breathing, a rainbow pattern, or lights that react to key presses. You can also sync RGB lighting with other ROG peripherals. 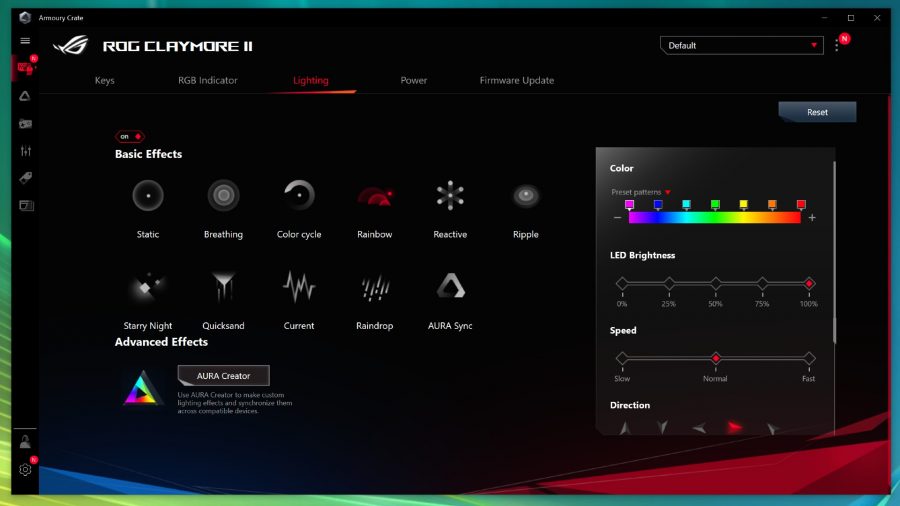 The ROG Claymore II connects via a wireless 2.4GHz dongle, so there’s zero latency to worry about unlike with a Bluetooth connection. This makes it feel just as responsive as any wired board I’ve used, with the added benefit of helping manage cables on your desk.

Asus rates the battery life at 47 hours with RGB lighting enabled and 100 hours with it switched off. Cranking the RGB brightness to 100%, I managed around five days of both working and gaming before needing to pop it on charge. This isn’t quite as long as the best wireless gaming mouse, but it still lasts longer than the Logitech’s G915 Lightspeed’s 30-hour battery life and the woefully low 13 hours of the Razer BlackWidow V3 Pro. Still, if you’re a heavy user or someone that enjoys colourful lighting, you’ll need to plug it in relatively often, which is never as neat as a tidy wired setup – I found myself messily leaving the charging cable hanging on my desk for weekly those juice ups.

A battery saver mode is enabled by default to eke out the battery life, putting the keyboard to sleep after three minutes. You can adjust the amount of time or disable it entirely if you want your RGB to shine when idle, but this will chomp away at your battery quicker. Fortunately, it reconnects instantaneously when you click a key, so I found little reason to tinker with the setting. 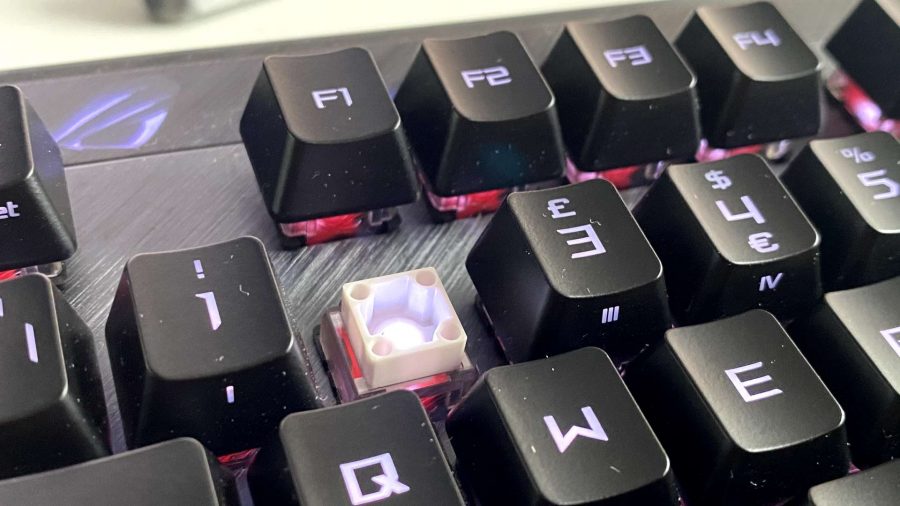 Asus moves away from the popular Cherry MX switches it uses in the original ROG Claymore in favour of its own optical switches with 4mm of travel. Although I’m hard-pressed to notice it in general usage, optical switches have a much faster actuation than mechanical switches, which could give you a competitive advantage in fast-paced games.

The linear ROG RX Red switches in this model are perfect for gaming, as you can press plenty of keys in rapid succession. They aren’t my first choice for typing – you’d be better off with the clicky Blue model – but it’s still a good experience thanks to a slight audible click. The stems are swings and roundabouts, as it won’t fit the same custom keycaps as its Cherry counterparts, but there’s a seriously impressive lack of key wobble – much less than I’ve found on switches from other manufacturers, which further cements its high price tag.

They’re not loud enough to wake the rest of your house during late night gaming sessions, either, making them a good compromise over Blue switches, and are plenty comfortable to type or game on for long periods. The plush magnetic wrist rest cushions you nicely, although it looks a little out of place when you run the Claymore II tenkeyless.

The ROG Claymore II is still pricey, though, and there are better value keyboards out there if you’re individually interested in a wireless connection, modular numpad, or optical switches. However, this model neatly combines these three features into a hybrid design with exemplary build quality, and you won’t find another keyboard like it.

The ROG Claymore II is a seriously impressive keyboard, thanks to top optical switches with zero key wobble, a modular layout, bright RGB lighting, and the ability to seamlessly switch between an 80% and full-size layout. However, its high MSRP puts it out of reach for many gamers.