The Asus ROG Crosshair VIII Hero (Wi-Fi) joins a long line of AMD gaming motherboard royalty. Never one to leave the red team by the sidelines, Asus has put together another feature-rich, high-end AM4 X570 motherboard for Ryzen 3000, bringing with it the Crosshair branding emblematic of the unfettered quality and performance we’ve come to expect from ROG.

It’s plenty kitted out for a little dodeca-core or hexadeca-core (don’t fact check these prefixes) Ryzen 9 action, the Crosshair VIII Hero featuring distinctive VRM and chipset thermal solutions of the absolute unit variety. They’re both massive and all-encompassing, and the VRM heatsinks cover the entirety of the board’s 16-phase (doubled) VRM, 14 of which are set aside for VCore alone. You can rest assured that no matter what voltage or workload you put through this mobo, it’s not going to cook itself in the process.

Needless to say the Crosshair VIII Hero also fully supports PCIe 4.0. This doubling of bandwidth allows for greater I/O, storage devices, and overall platform bandwidth. On this particular board that notably amounts to two M.2 SSD slots rated to x4 PCIe 4.0. These are covered by a sizeable heatsink with single-sided thermal pad. Oddly, however, the top M.2 slot is only accessible by removing an aesthetic plate covering the chipset fan and heatsink.

The Corsair Force MP600 NVMe, fitted with the PCIe 4.0 amiable Phison controller, managed to break our SSD records thanks to that extra bandwidth – if only by a little over the theoretical max bandwidth of PCIe 3.0.

Memory support has increased dramatically with Ryzen 3000, and the Crosshair VIII Hero has the ability to cross over the 4,800MHz barrier with the right DIMMs. However, AMD suggests you keep the Infinity Fabric clock inline with the memory clock, and that means top performance/latency around the 3,733MHz mark. 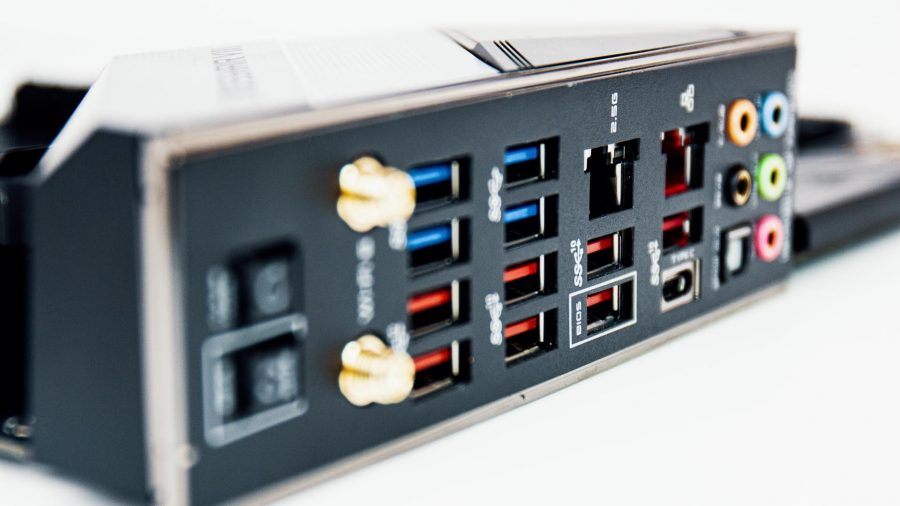 Complimenting the innate qualities of the X570 chipset, Asus has also fitted this high-end board with a veritable feast of USB connectivity. On the rear I/O of the board there are dual banks of USB 3.2, four ports a piece. With a Ryzen 3000 processor installed in your board – which must be all of you because buying an X570 for a 1st or 2nd Gen Ryzen chip is maniacal – the bank highlighted in red will run at Gen2 speeds direct from the CPU. Otherwise both banks will revert to Gen1 speeds. Alongside that, there’s also another trio of Type-A Gen2 ports and a single Type-C port.

Networking is similarly an elective affair. Both Realtek RTL8125-CG 2.5G and Intel I211-AT LAN ports are available via the rear I/O. And if you need to haul your rig out of reach of your router, there’s always the integrated Intel Wi-Fi 6 AX200 to keep your connection consistent and stable.

Despite the tears of audiophiles everywhere, most gamers will find themselves plugging their headsets into their machine directly. If that’s via a 3.5mm connection, you’re going to find yourself on Asus’ ROG SupremeFX S1220 codec and the ESS ES9023P DAC with solid clarity and little to no fuzz.

Yet for all its successes, purchasing the Asus ROG Crosshair VIII Hero remains a farsighted investment in the PCIe 4.0 ecosystem. A hope that, one day, a graphics card will require PCIe 4.0 and will be all the better for it. Until then, motherboard performance is simply too nuanced, and gamers have little to gain from the move to X570 beyond the dreaded ‘future-proofing’ spiral and a handful of high-end features. 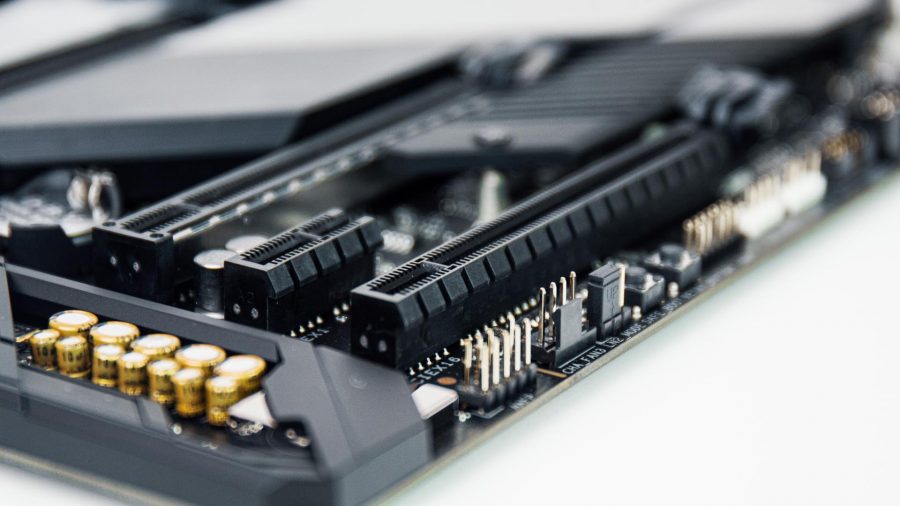 But maybe you’re cut from a different cloth: part of the money-no-object market AMD’s eyeing up with its high core-count Ryzen 3000 processors. In that case, maybe this PCIe 4.0 business is worth a punt.

The Asus ROG Crosshair VIII Hero offers peace of mind. If you need a feature one day, or a dizzying amount of USB ports, odds on it’s already present and accounted for on your mobo. That’s what you get with a high-quality, enthusiast motherboard, and that’s what you’re paying out of pocket for. Whether that’s enough to convince you over to the X570 in a backwards compatible AM4 dreamland where yesterday’s top motherboards are cheaper than ever, that’s up for you to decide. But I’m going to bet that any one of the numerous B450 and X470 motherboards in the market today vying for your business will serve the average gamer just as well for many years to come.

Asus left no stone unturned in its crafting of the Crosshair's specs list. But when performance is a no-show between the cheapest board and the most expensive, how much are you willing to pay for peace of mind?