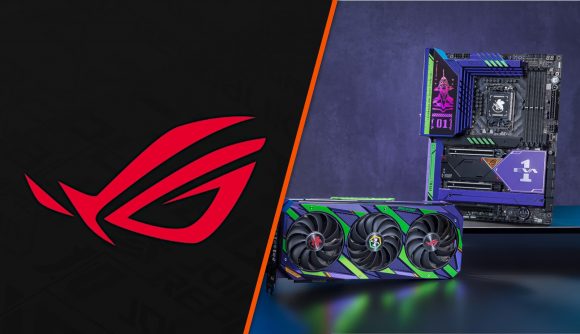 Building an anime-themed gaming PC seems to get easier with each passing day, with more manufacturers pushing out systems and components inspired by beloved Japanese animation. Now, it looks like Asus ROG is planning to release its own Neon Genesis Evangelion themed system, and its specs may be as monstrous as EVA-01.

Teasing the upcoming gaming PC across its social channels, Asus ROG describes its EVA-01 homage as “the ultimate machine” but is yet to provide any official specs. However, the company has been kind enough to offer us a glimpse at its Evangelion PC case, providing you can squint your eyes and look past the obfuscating text. We’ll have to wait until May 14 though to get a better look at the purple-green rig.

We can make some educated guesses about what we’ll eventually see, though, as Asus ROG is already selling limited edition variants of its best graphics cards and gaming motherboards complete with Evangelion designs. This new system will likely come packed with one of Intel’s best gaming CPUs given the Z690 chipset, and we should expect an Nvidia GeForce RTX 3090 to accompany it.

Check out the teaser image below:

If Asus ROG’s EVA-01 components aren’t to your liking, you might find MSI’s Evangelion gaming PC collection more up your street. For those who’d prefer to game on an All Might-themed rig, NZXT recently released a My Hero Academia PC case, but you’ll need to be quick should you want one as it’s a limited edition.