Kitting out your gaming setup is usually a lot of fun. After you painstakingly manage cables to build a gaming PC, and shell out for the perfect peripherals, you’re finally ready to venture online. The squad is in the CS:GO lobby and you’re ready to go 16-0 on Cache. Then, just after the warm-up period, your connection drops.

Turns out that your ISP’s stock router isn’t up to scratch, your team is now down a player, and you’ve earned yourself a nasty competitive cooldown for abandoning the match. It’s on this sham of a Friday night that you realise picking up a reliable gaming router isn’t the most exciting purchase, but it’s one of the most important.

The Asus TUF Gaming AX5400 router is built for every type of gamer, providing you with a reliable connection both wired and wirelessly. It features WiFi 6 functionality, which boasts stronger signals across a wider area compared to WiFi 5. While it’s unlikely that you’ll have an internet plan that takes full advantage of the speeds that WiFi 6 promises, upgrading your router to the next generation of WiFi should provide you with a more stable connection. This also means that even if your network is stacked with your entire family’s devices, all of them will receive the same bandwidth.

Setting up the AX5400 is straightforward; simply plug the cables from the modem into the router. This router is packed with several advanced features, all of which you can finely tune using its dedicated app, but you don’t have to get bogged down with these from the get go. In my experience, the AX5400 works perfectly straight out of the box, and there are even a few bells and whistles such as OpenNAT, gaming VPN compatibility, and the ability to use USB modems that make it feel far more premium than its RRP.

Unfortunately, Asus has cut a few corners in order to reach this price point. The AX5400’s largest omission is its lack of a built-in modem. Depending on your ISP, this might not be a concern, but it is worth setting some cash aside just in case. Setting up a separate modem adds a few more steps to the setup process, but if you’re the type of person to read a review like this, it shouldn’t cause you any problems. It would also be nice to have a few more Ethernet ports at the back of the router. Given the price point, four ports certainly feels fair. 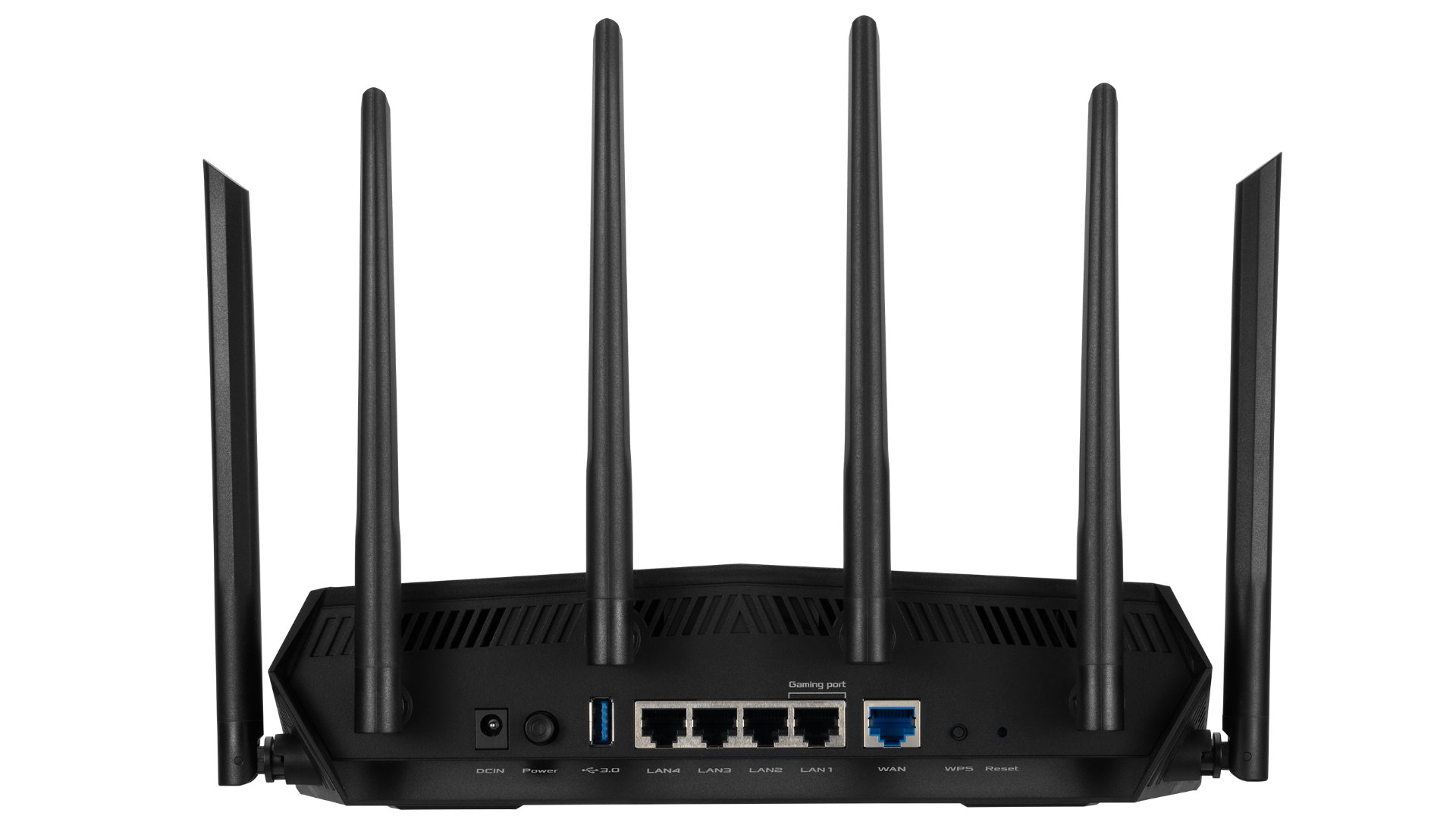 This router boasts WiFi 6 functionality, but is that worth upgrading your current network solution for? Well, that depends on how many devices you have that support this latest standard. If you’ve recently upgraded your phone or laptop, there’s a good chance your device may support WiFi 6 speeds. That said, it’s early days and the majority of your devices likely won’t be able to take advantage of the new tech.

The Asus TUF AX5400 doesn't stretch across three floors, but shines when paired with the ZenWiFi XD6 Mesh system

My living space spreads across three floors and some of my devices still use 2.4GHz. Having previously used the Netgear Nighthawk X4S with the Nighthawk X6 WiFi extender, there were plenty of areas where the connection couldn’t reach. Compared to the X4S, the AX5400’s range is slightly better thanks to WiFi 6, but I still have the same wireless dead spots. Devices like my Nest doorbell regularly disconnect, and I can’t stream podcasts on my phone in my bedroom as they’d buffer too often.

The AX5400 really shines when you include the ZenWiFi XD6 Mesh system. This consists of a pair of ASUS AX5400 WiFi 6 routers, boasting a 5,400 square foot coverage between them – you can also buy a single unit, which covers a 2,700 square foot area. If you’re planning to use your PC or consoles wirelessly, this is another add-on that you may have to consider depending on the size of your home. 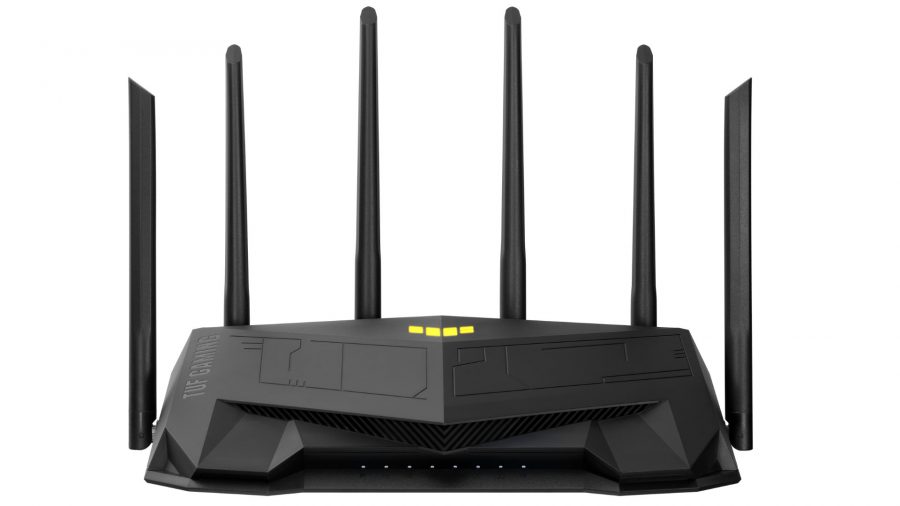 The Asus TUF Gaming AX5400 matches the TUF aesthetic in that it’s a rugged and durable little spaceship that’ll tuck neatly into the corner of your living room or office. While it’s by no means the prettiest router, you’d be hard pressed to find one in the same price range that doesn’t look like a plastic spider. More importantly, the XD6 Mesh system – which will actually be on show – is a lot easier on the eyes, and blends into its surroundings with its sleek, inoffensive design.

The router makes port forwarding easy with the OpenNAT feature – this makes playing online, particularly on consoles, a simple process. If your NAT type is strict, you may find it difficult to connect to other players in multiplayer games and even stop you from being able to use voice chat with your mates. I didn’t experience any NAT-related issues using this router, but I know how much of a headache this can be based on past experiences. While the OpenNAT functionality isn’t something I used during my review period, it’s reassuring to know that I have the option in case this problem ever crops up.

Once you have a better internet connection, you’ll want to boost fps

The ZenWiFi XD6 Mesh system is the true star in my home setup. I found that the double pack XD6 Mesh system is an expensive, yet essential add-on for me with a living situation that spans across three floors. However, if you’re keen to upgrade to WiFi 6 on a budget, the Asus TUF AX5400 is a cheap and cheerful choice that’ll let you take advantage of the latest wireless tech, without an eye watering price tag.

If you’re looking for a reliable upgrade from your stock router, the Asus TUF AX5400 is the easiest upgrade you’ll ever make. It’s one of the cheapest WiFi 6 routers on the market, and the additional features that Asus manages to cram into the box make it even more attractive. It should meet most gamer’s needs without ever adjusting the stock settings, and the future-proofing from switching to WiFi 6 now also means that you won’t have to think about buying another router for a few years, or stress about dropping out of your CS:GO matches.