There’s an early mission in Back 4 Blood that encapsulates everything that’s brilliant about it. Your squad of four aims to reunite with a convoy of survivors, and the only way of making it up to the rendezvous is through the bowels and across the deck of a crashed ferry that’s teeming with undead.

It’s a breakneck dash for survival in which you’re constantly flicking between rotting heads, checking on your teammates, and changing routes to avoid minibosses. If someone goes down the whole team needs to circle back, throw up defences like barbed wire, and hold the position long enough for your medic to get them back to their feet. When you finally reach the other side there’s a bounty of supplies and a minigun emplacement, which provides just enough firepower to stem the tide of zombies that’s spilling onto the deck of the ferry. But the mission is far from over.

If you just retreat, then eventually the zombies will continue crossing the bridge and make it to your stronghold. You’ve got to sink the ferry, which means that /somehow/ you’ve got to punch a way through the throng of hungry ghouls. There are two bombs that need planting at opposite ends of the ship’s lowest deck. We need someone manning the minigun to keep the top deck clear, two people to go in and plant the charges, and someone to guard them while they’re vulnerable.

Once both charges are planted you only have one minute to make it back to the bridge – no mistakes. Except when my squad tackles this mission for the first time there’s a pretty big mistake: I get downed on the middle deck with just over 40 seconds left on the timer. The other two are almost back at the convoy, but without exchanging a word the minigun operator ditches their post, and all three battle their way back into the ship, get me back to my feet, and we make it to safety with only a couple of seconds to spare. 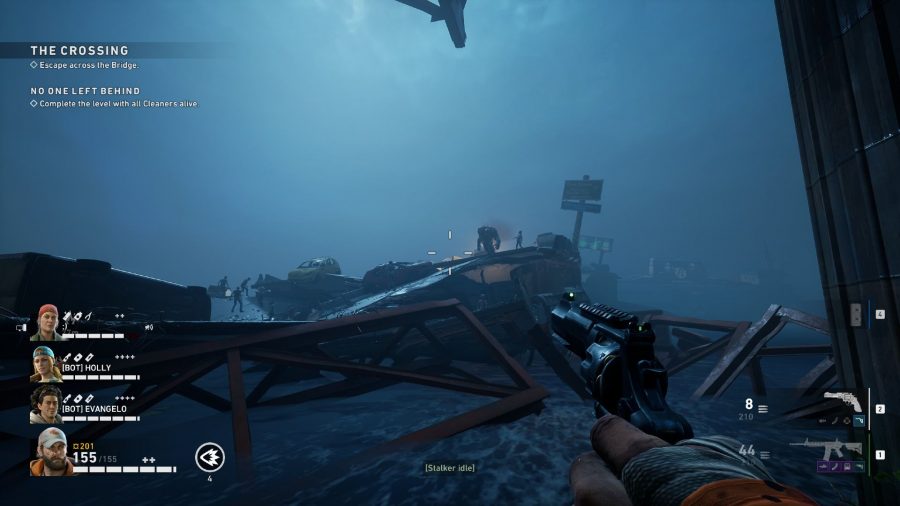 With a good set of friends around you and a little bit of luck with spawns, Back 4 Blood – which you can buy here, by the way – can create some truly cinematic experiences. Sweaty-palmed, edge-of-your-seat survival stories that live long in the memory. And it’s important that they’re memorable, because for every moment of triumph there are usually a couple more when you’re tempted to quit in frustration.

Back 4 Blood’s campaign is split into four acts, and a complete run of one of those acts can take up to four hours. Between each level the game’s AI director will respond to your progress by introducing Corruption cards, which are designed to keep you at the limit of your abilities. These come in a variety of flavours. Some spawn bosses in areas where they wouldn’t typically appear; some fill the level with mist or fog – yes, there’s a difference, a big one, but I won’t spoil it for you – so it’s almost impossible to see a few metres ahead; some buff minibosses by making them more aggressive or armouring their weak spots; and some add loud noises to a level in the form of alarmed doors or flocks of crows, which will summon more zombies if you trigger them.

Most of the time these Corruption cards work exactly as intended, varying levels for repeat playthroughs and scaling the challenge with your party’s success. Skip through the first couple of levels without anyone getting downed? Fine, here’s an extra boss and a new trap-style zombie to deal with. Oh, and zombies sprint now. However, the seeming randomness of this system and some particularly nasty card combinations can stop a run dead in its tracks. 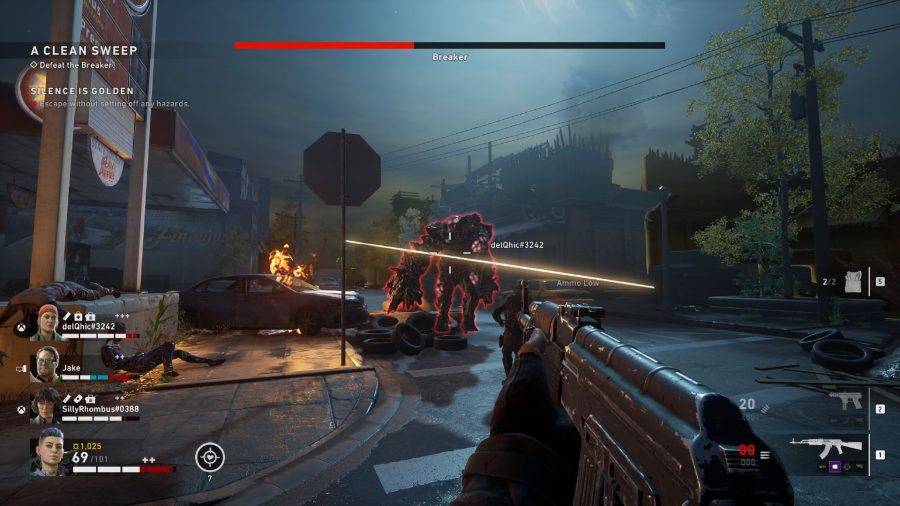 I can feel my blood pressure rising when I pull Mist and Slumber Party on the same level. The former hampers communication and obscures Back 4 Blood’s irritating ranged enemies, while the latter adds wall-mounted zombies called Sleepers that leap at you whenever you stray too close, pinning you in place for a few seconds and taking a chunk of your health. Sleepers are a nuisance at the best of times, but when you literally can’t see them they’re downright obnoxious. Likewise, trying to navigate a level with both crows and alarmed doors is an exercise in trigger discipline that’s more suitable for a tactical FPS like SWAT 4 than a frenetic horde shooter.

the zombies gush and spew and splatter with Savini-esque flair

To keep pace with the AI director, you get to pick a new card from your own pre-built deck between levels. There are well over a hundred different cards that you can pick for your deck of 15, but you’ll need to unlock them before you can really start experimenting with builds. These cards fall into a few simple archetypes, like offence, defence, and support, but as you get close to completing your collection you’ll find plenty of niche cards that let you lean into specialised character builds. So far I’ve managed to create agile medics who can nip around the battlefield keeping everyone’s health topped up, snipers who can one-shot minibosses thanks to weak spot damage modifiers, tanky melee warriors, and even grenadiers.

It’s a superb system that benefits the wider game in every way. Failed runs still reward Supply Line points, which you’ll spend to access new cards, which in turn will help you make it further in your next run, or possibly even tackle the campaign on a higher difficulty. The result is a zombie-slaying co-op shooter with roguelike progression. It’s a deliciously moreish mashup. 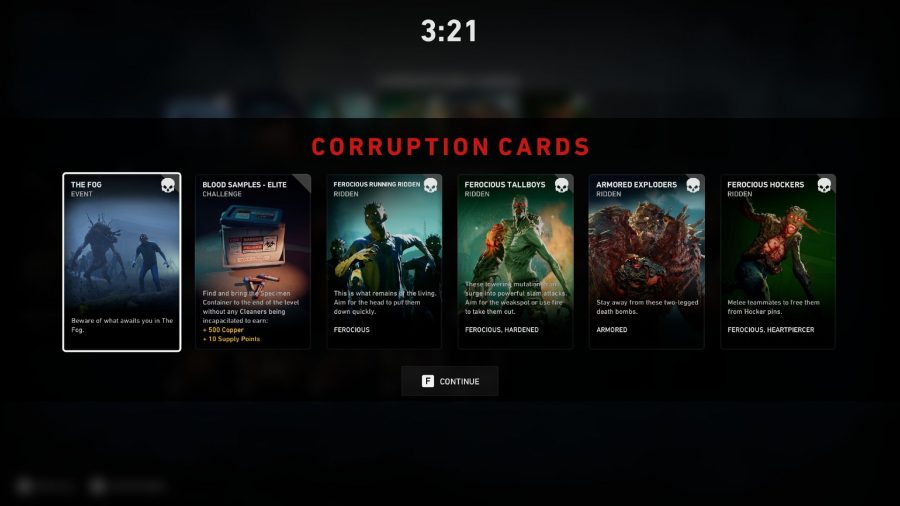 Unfortunately, you’re only driven to engage with Back 4 Blood’s deck building on veteran or nightmare difficulty, due to the huge gulf between veteran (medium) difficulty and recruit (the lowest setting). Recruit, while completely necessary and appreciated from an accessibility standpoint, is so undemanding that you can comfortably ignore the deck-building mechanics that set Back 4 Blood apart from games like Left 4 Dead. Those tense set pieces I described earlier become tedious slogs devoid of any threat, and you barely have to adapt your play style when you come across new minibosses or Corruption cards. On veteran difficulty the challenge is so severe that after 16 hours my squad is still trying to complete a continuous run of act one. There’s no middle ground for post-apocalyptic Goldilocks; she must choose between cold porridge, scalding-hot porridge, and a bowl of lava.

Regardless of difficulty, Back 4 Blood also has too many minibosses – or mutations, to use the game’s parlance – and introduces them via the same pathways as its regular Ridden (yep, that’s what Turtle Rock is calling its zombies). While Left 4 Dead’s special infected arrive on the scene with foreboding music and pose a real threat to your squad, Back 4 Blood’s mutations are designed to add variety as part of the general melee. There’s always one on the scene: Bruisers stalk you, clubbing you with a hammer when they’re close enough; Retches spew bubbling, acidic vomit at you from afar; Exploders charge at you and detonate, showering your party with toxic sludge; Hockers hop around the level and spit immobilising mucus at you.

There are many more varieties, and I’d guess these mutations account for roughly 15% of enemies in a given level. While they’re easy to deal with in open spaces, the fact that they spawn alongside normal zombies can lead to some frustrating fights. I’ve had Exploders fall off rooftops, land right next to me, and explode, downing me and damning my team in an instant. Hockers, meanwhile, can sometimes be hidden completely by foliage, so you’ll routinely get trapped by one with no idea where the shot came from. These are small frustrations in the grand scheme of things, but they have a habit of compounding your squad’s problems when you could really use a moment to catch your breath. 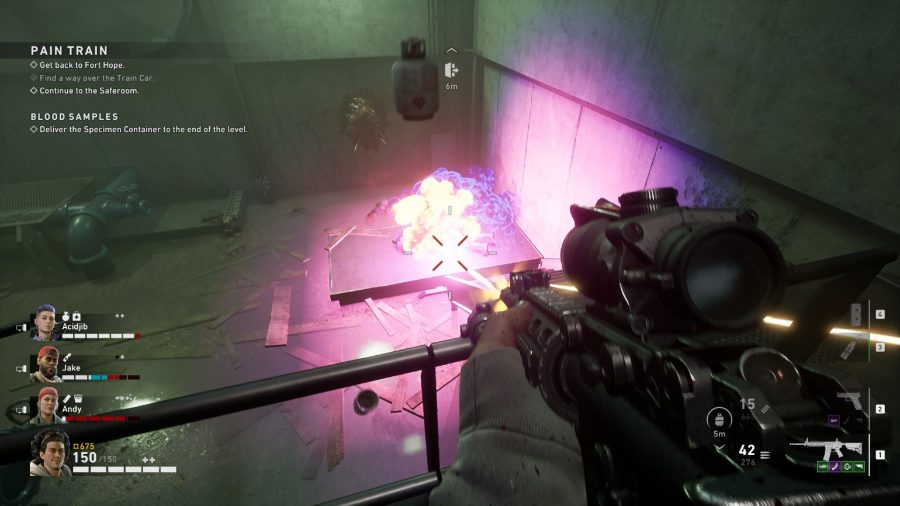 Speaking of catching your breath, there are a bunch of smart adjustments to Left 4 Dead’s formula when you reach the inter-level safehouses. You can buy ammo, health, throwables, and gadgets from the vendor, but you can also pool your money and splash out on expensive item upgrades that stay with you for the duration of a run, and make a huge difference to your survival chances. Fully upgraded razor wire, for example, creates a highly damaging circular barrier that makes holding a position so much easier. Upgraded bandages heal considerably more health per use, team health or ammo upgrades buff everyone’s max stats – there are a lot of options when it comes to spending your scavenged copper pieces. Making the right calls as a team when you’re in the safehouse can make or break a run.

It’s these types of decisions that really elevate Back 4 Blood above its spiritual forebear. There’s just so much more to think about, whether you’re in the heat of battle or strategising with your friends in a safehouse. The shooting is satisfying, the zombies gush and spew and splatter with Savini-esque flair, and the campaign features some spectacularly confident escalations. You’ve played that last part before, but Back 4 Blood as a whole is something new. And while it’s far from perfect, it’s also one of the best co-op games I’ve played in years.

Back 4 Blood is out now and you can buy it here. We’ve also got guides on where to find all of Back 4 Blood’s golden skulls and the best Back 4 Blood cards.

It can feel unbalanced and unfairly punishing at times, but when all of its systems click into place Back 4 Blood is a ton of fun.