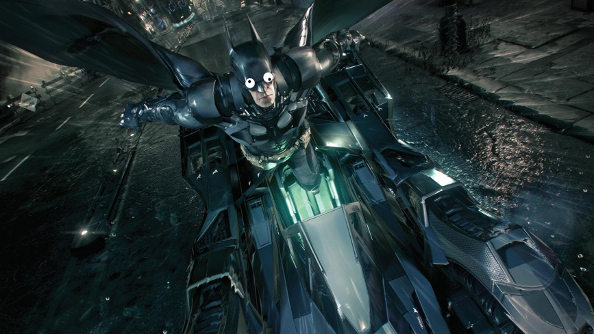 Batman: Arkham Knight received a long awaited “interim” patch today, which adds several options that should have been in the game at launch, along with some performance improvements.

I’ve spent the afternoon testing it, and while it’s certainly an improvement over the nigh unplayable state it launched in, there’s still clearly a long way to go before it could be considered a competent port.

At launch, Arkham Knight was in a terrible state. A slew of graphics options were missing, it was prone to crashing, the frame rate was wildly inconsistent and far lower than it should have been and, when driving the Batmobile in particular, it was like watching a slideshow.

How bad it was depended, of course, on the rig it was being played on and, apparently, luck, but overall it was clearly not in an acceptable state.

Today it is, at least for me, playable.

First off, anti-aliasing and anisotropic filtering can now be tweaked, while other graphics settings like textures can be set to “high” instead of “normal”. There’s also a convenient VRAM meter that shows how much VRAM you are using, and it changes in real time as you fiddle around with the settings. Unfortunately, it’s not a particularly good judge of what your performance will be like.

At 1080p, using a Intel i5-3570K @3.40 GHz, 8 GB of RAM, GeForce GTX 970 with Windows 7, it’s proved to be impossible for me to hit that sweet spot where the game maintains a frame rate of 60. It doesn’t vary as wildly as it used to, nor does it dip as far as it did at launch. And thankfully the frame rate has been unlocked, so you don’t need to mess around with the ini files anymore.

Still, it fluctuates a lot. On foot, it’s mostly jumping between 55 and 60 on max settings (with the Nvidia GameWorks guff turned off) with vsync, which is more than acceptable, but while gliding it jumps around a lot more, going as low as 40.

Driving the Batmobile is still the biggest problem for performance. That isn’t to say it hasn’t dramatically improved, but the frame rate can still range from anywhere to 30 to 60, occasionally freezing entirely for a couple of seconds.

Substantially lowering the settings below what my GPU can handle does improve the situation, but at the cost of fidelity. And even then, the frame rate remains inconsistent. Even if I turn all the bells and whistles off and reduce the graphics settings to their absolute lowest, I’m witnessing fluctuations.

It’s worth noting that some users are reporting a lot fewer problems, but that’s to be expected, especially when some of them are using very expensive GPUs like the 980ti, which really shouldn’t be necessary for a stable performance.

One thing that’s worth doing, if it does still run like a car with no wheels or there are some texture problems, is to delete all the ini files and verify the cache. This is only if you’ve modded the files previous or used a program that does this. I did, and when I deleted the files and verified the cache, I did see a noticeable improvement

If Arkham Knight had launched in the state that it’s in now, it might have been fine. If I was doing a port review, I’d still probably fail it, but it is undeniably playable. It didn’t launch like this, though; the current state is the product of two months extra work, and it still needs some serious work in terms of optimisation.

My advice, if you already own the game, would be to reinstall it and check it out for yourself. You might be lucky. But since we’ve already waited for a couple of months, we might as well wait a little longer for better optimisation and the other improvements that WB have promised.