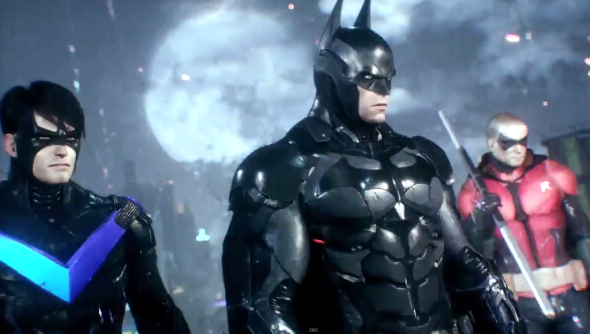 Rocksteady’s newly released trailer for Batman: Arkham Knight shows the Dark Knight himself joined in the fray by a few members of the Bat-family. Nightwing, Robin, Catwoman, and Azrael all make appearances, with some of them helping Batman out by holding down some thugs so he can give them a meaty right-hook. It’s all pretty exciting and bone-crunchingly violent.

But what does this trailer mean? It’s easy to jump to the co-op answer, building hopes that two players will be able to team up and battle as a team of vigilante side-kicks through the crime-ridden streets of Gotham. But Rocksteady have previously said that co-op was not coming to the game, so more realistic expectations would see members of the Bat-family turn up as AI companions for certain sections of the game.

We’ll keep praying for co-op, though. It wouldn’t be the first time game companies have tried to misdirect us, right?

Update: The team-up system in Arkham Knight is called ‘dual-play’, and will alow you to swap on the fly between control of Batman, Robin, Nightwing, and Catwoman. So it’s just single-player, but being able to go into the field with more than one superhero sounds pretty great.

Arkham Knight hits PC in digital-only form on June 23rd. You’ll need a PC as massive as Batman’s arms to run it, though.