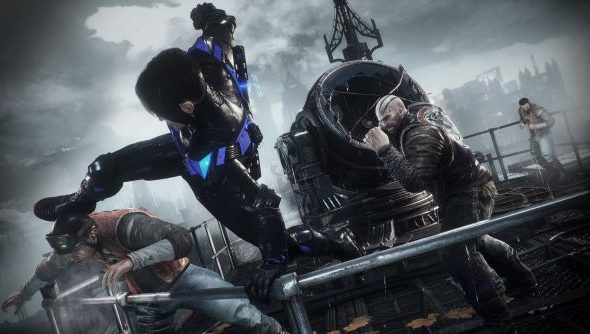 Oh, how the mighty have fallen. What was once one of our most beloved series of games, not least for their generally reliable ports, Batman’s latest iteration in Arkham Knight has proved disastorously unstable on PC. Pulled from sale before being eventually brought back, there are still massive patches being applied semi-regularly to try to get performance up to par. The latest, from this week, still fails to bring it to an acceptable level.

They might not help with Arkham Knight, but Phil’s been rounding up the best hardware deals from Black Friday week.

As reported by Eurogamer’s Digital Foundry, the patch promises to improve VRAM management in the hope this will fix stuttering. While things have improved since launch, equivalent hardware is still not allowing for graphics quality on par with consoles at decent framerates and pushing it onto high is an adventure in dropped frames and laggy inputs.

Our own Fraser tried the patch and told me that he still wasn’t having any luck, “It’s just not stable, regardless of the settings. There is simply no way to get that game to run at 1080p60, regardless of hardware.” While that may seem like a luxury to some – let’s not go over the state of my PC again – it’s expected that engines making the jump to PC will be able to exploit the ridiculous strength of its hardware. Good machines can now get 30fps on high settings, and inside sections are a lot less tempremental than the outside world and the Batmobile, but it’s a far cry from 100%.

Meanwhile the same patch also put the November DLC into the game. I haven’t seen anything that’s made me want to get back into my (PS4-based) playthrough post-completion – anyone had any fun with the new stuff, or found their performance has improved a notable amount? Remember that, no matter how much you’ve played, Warner Bros. are offering refunds until the end of the year.