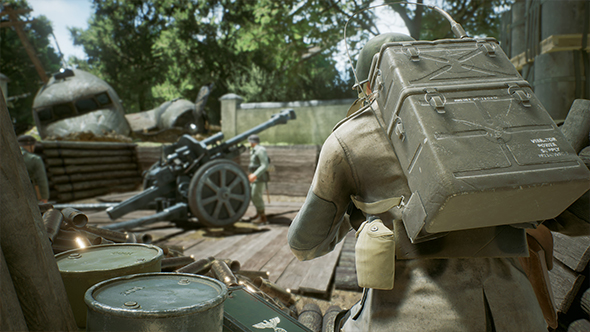 Battalion 1944 launched in Steam Early Access almost two months ago, and despite some strong pre-release impressions things didn’t go especially smoothly. After some significant day one server issues, average player counts have dropped, and the community has been concerned about the state of the game.

Earlier today, former pro COD player Boudewijn “aerox” Verleg made a lengthy post onReddit to offer some “radical” suggestions to keep the game alive, ranging from “admit you fucked up” to “go back to Open Beta.” This prompted a similarly lengthy response from studio lead Joe Brammer, who detailed some of what’s been going on in the studio.

“It is always too early to go to early access,” Brammer says. “We did NOT fuck that up. We had less than a couple thousand GBP in the bank account the day the game released. For us, it was make or break. We had a very financially successful business for years. We decided to risk everything on Battalion 1944 because its the game we wanted to make.”

Of the early matchmaking issues, Brammer says the problems were out of his hands and due to a mistake in Google’s services. “When we released I decided to fall on the sword and take the blame claiming ‘oh I didn’t predict the numbers, and oh there weren’t enough servers’. This was a publicity cover up. Google had a tech issue in their ‘App Services’. But I chose to take the blame and protect a partner, I also thought ‘nobody would believe it was Google’s fault’. Well it was, the issue wasn’t exposed with the 5,000 players in the beta because the issue was to do with a ‘cap’ on some of their services that a programmer AT GOOGLE had unintentionally left in the code.”

Brammer admits that the “brand is damaged,” but cites DayZ as a game with “horrific brand damage” but has had a 24-hour Steam peak of 3,700 players and is releasing soon on Xbox. In other words, there’s still room for Battalion 1944 to recover. “Currently we’re building Battalion 1944 as a brand, but lets just say there will be ‘another’ game at some point in our life cycle, you guys only see the ‘broken game’ but what we see is finished tech. We didn’t make a game, we made a series of tools that can be used in the future. Let’s call it round 2 ding ding. Can’t say any more.”

He also says that their approach to esports has been a problem, especially by focusing too hard on professional scenes at the expense of an insufficient casual experience. Brammer says they’re designing more content for Arcade along with mode improvements and bug fixes to help keep up that end of the game.

Brammer also gives a bit of thanks to the community and aerox in particular, saying “that was a pretty good attempt at trying to rekindle Battalion but we have plans! Which hopefully I’ve given you ‘some’ insight into without getting into too much trouble. The next time ANY game has a rocky launch. Think of this information. Of which I will be spanked for by the PR team tomorrow.”