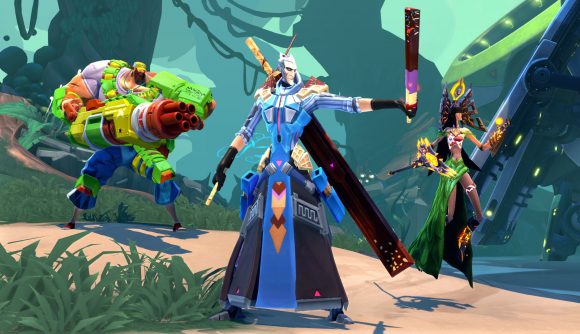 2K has begun the process of permanently shutting down Battleborn. The hero shooter will remain active until 2021 before being sent to the great server graveyard in the sky.

2K revealed the news in an official announcement that outlined plans to gradually sunset Battleborn so the developers can be re-distributed to other projects. The first move is already completed – the game is no longer on any storefronts, so unless you already have it, you missed your chance.

The next step comes in February 2020, which is when Platinum, the in-game currency, will cease to be sold. Any Platinum already in circulation will still be viable, and you can still earn it through grinding, but you can’t buy any more. Then, in January 2021, Battleborn’s servers will cease to be, and the game will be completely unplayable. The post does stress that nothing in-game will change between now and 2021 minus not being able to buy Platinum, but yes, unplayable does mean all the single-player features will be inaccessible too.

Battleborn struggled to gain traction from the get-go by releasing mere weeks before Blizzard’s Overwatch came out and became the dominant hero shooter. 2K tried to draw in players by making the game free-to-play in 2017, but not long after it was announced that development on new content had halted and Battleborn was effectively in maintenance mode.

2K isn’t the only one having to deal with a shut down – Behaviour Interactive is currently in the process of closing Deathgarden: Bloodharvest, a multiplayer survival horror, less than 18 months from first launch.

If you have Battleborn, you have until January 2021 to play it.