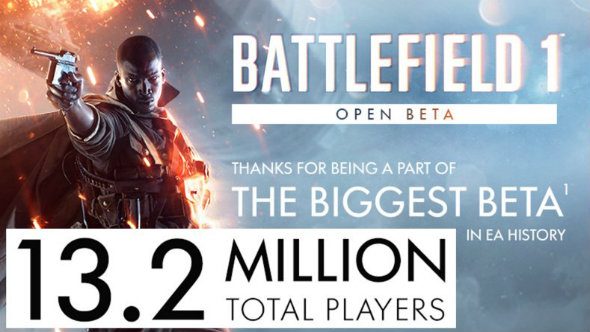 Which of our upcoming PC games list are you excited for?

Actually, EA are being rather modest here, since it’s actually the biggest beta ever, for anyone. Yeah. Previously, the biggest was Overwatch, which almost hit 10 million, so Battlefield has absolutely smashed it.

According to industry analyst Daniel Ahmad, there’s a common trend with the big hitting betas so far. In a tweet, he listed all the previous beta player count champions, noting that each has surpassed this player number in sales within three months. If Battlefield 1 can do the same, it could be on track to beat COD this Xmas.

One trend I'll note is that each of the full games above sold to more people than played the open beta's within the 3 months from launch.

EA said 30% of those 13.2 million players chose the Assault class, with the Scout coming in a close second with 28%.

There were also 62.2 million kills while on horseback, 28.9 melee kills, and the most destructive Elite class was the Tank Hunter. Now they just need to nerf the horse, because come on now.

Battlefield 1 will be released on October 21.