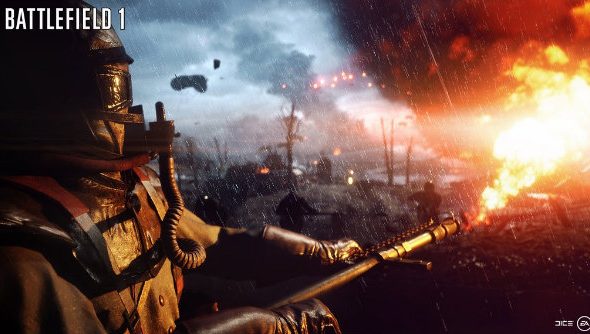 During last night’s EA earnings call it was revealed that Titanfall 2 would release between October and December, sharing the same quarter as EA’s other FPS, Battlefield 1, which releases on October 21. But despite this proximity, EA aren’t worried that the two games will negatively affect each other’s sales.

The two games might both share a genre, but will either of them be good enough to be added to our list of the best FPS games on PC?

During the financial call, the subject of the two first-person shooters potentially cannibalising sales from one another came up, and EA execAndrew Wilson responded, saying the genre had a fanbase large and diverse enough to support both games.

“There is a very broad and diverse set of players who play games in that category who are looking for – to fulfill different game play motivations,” he said (via Seeking Alpha).

“Some people play very quick play, some people more strategic play, and some people want both in different context. The result [is] we feel like we actually have a really strong position to deliver the broadest set of gameplay mechanics as it relates to first-person shooter genre across the two titles, and feel very confident that we are well-positioned to do very well in that category [this] year.”

In other words, the publisher is confident that the two games are distinct enough that they both scratch a different itch.

Which will you be picking up, if any? There’s not a massive amount known about Titanfall 2 currently, but we have put together a wishlist of everything we want from the mechanised shooter.

As for DICE’s WW1 shooter, we know a fari bit. Here’s everything we know about Battlefield 1.