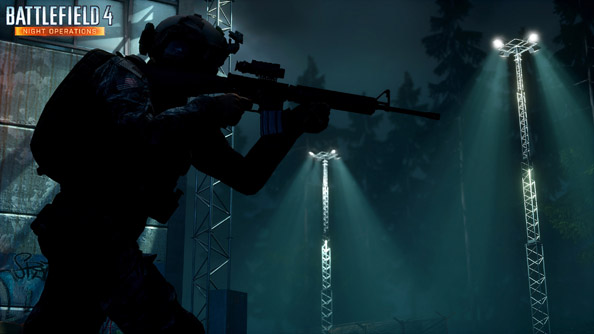 “What’s it like to play a Battlefield 4 map that takes place at night?”, ask DICE. Less frustrating, presumably, because you can’t see the frame-lag that’s getting you killed behind cover.

I jest, somewhat unfairly – Battlefield 4’s most egregious bugs were patched out long ago in a concerted drive to steady the ship (before blowing it up again, in the name of levolution). You’ll now find DICE doling out free victory lap DLC. Next up is September’s Night Operations.

The trailer is a cinematic one, directed by YouTube Battlefield enthusiastTwo Scotsmen. It’s less harrowing meditation on man’s inhumanity to man, more celebration of cool coordinated assaults you’ll never quite manage to pull off yourself.

As for the darkness? It strikes me that Battefield’s marketing palette of grey-blue and orange has never been so faithfully recreated in-game as when Scotsmen’s helicopter crashes into the gates of a Russian tank factory at night-time.

Night Operations will put a ‘Graveyard Shift’ spin on the familiar Zavod 311 – and equip players with the night vision scopes and flares to handle it. In a Thief-y touch, we’ll be encourages to destroy light sources like lamps to engender better sneakery.

The altered map will support Conquest, Rush, Obliteration, as well as the infantry-focused Team Death Match, Domination and Gun Master. Think you’ll stumble blindly through its gates once it’s released for free next month?