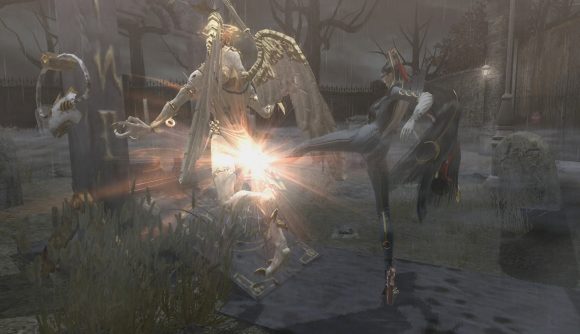 We haven’t heard much about Bayonetta 3 since it was announced a few years ago. Developer PlatinumGames hopes to change that this year, and reveal some other projects besides.

In a conversation between Bayonetta director Hideki Kamiya and Hamster Corporation CEO Satoshi Hamada as part of Hamster’s Arcade Archives series (ta, Nintendo Everything), Kamiya stated he’d like to give a substantial update this year, on Bayonetta, and more besides. “We’ve been working on new stuff like Bayonetta 3, not that I can say too much, but I hope we can give an update during the year,” He said, adding: “And give updates on a few more unannounced projects too. I’m not sure if I’m allowed to say that, but I said it anyway.”

Bayonetta 3 was announced at The Game Awards 2017, with nary a tangible progress report since. Bayonetta 2 came out for the WiiU in 2013, and Bayonetta 3 is an exclusive for the Nintendo Switch. The unannounced games are anyone’s guess. As of now, PlatinumGames has two other releases in the works: Project GG, the third in Kamiya’s superhero trilogy, following Viewtiful Joe and The Wonderful 101, and Babylon’s Fall, a large-scale action-adventure game being published by Square-Enix.

It might not be the substantial news fans are hoping for, but it sounds like when PlatinumGames is in a position to give us more, it’ll be worth the wait.

In related news, Nier: Automata‘s last secret was finally discovered this month, ending a nearly four year quest to uncover everything in the RPG game.