Having launched into Steam Early Access in September this year, Blazing Sails has accrued a modest following with comfortably over a thousand players booting up every day and a ‘very positive’ user rating at the time of writing. But the wind is really in its sails on Twitch, where this pirate game found over 13,000 viewers on December 2.

Sure, there are more than a few similarities to Rare’s Sea of Thieves, but the differences are profound, too. Blazing Sails is not a cooperative exploration game, but a team-based battle royale in which you must eliminate other ships to become the scourge of the seven seas. The pirate genre has seen a bit of a renaissance just lately, but there still aren’t many games out there quite like it.

We spoke to Gauthier Thibaut, community manager at Get Up Games, about the challenges of bringing this pirate battle royale to Early Access, how Unreal Engine 4 helped its four-person team make the game in the first place, how it aims to attract new players, and just why we’ve seen swashbuckling buccaneers get such a resurgence.

“Indeed, for a long time it seemed like there were no developers interested in making pirate-themed games,” says Gauthier. “Luckily for us as fans of the genre, this has changed lately, starting with Assassin’s Creed IV: Black Flag.” 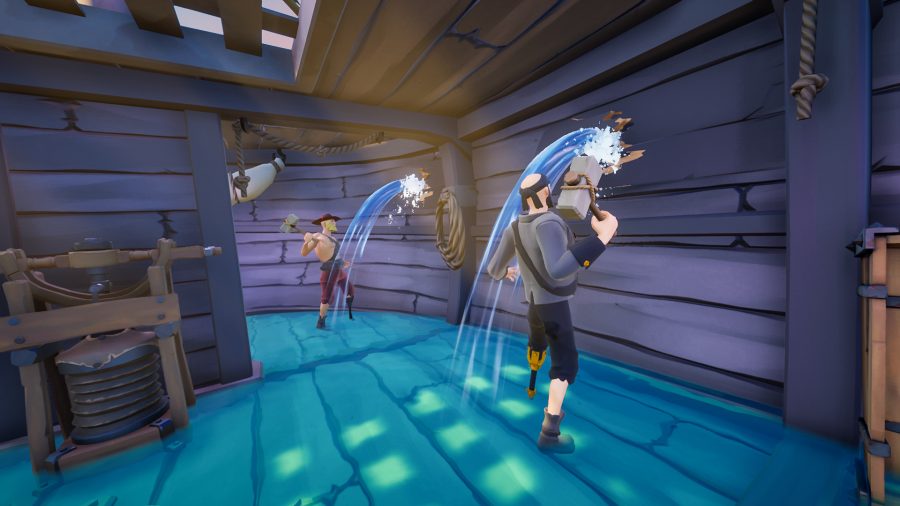 Other pirate games set sail soon afterwards, but as Gauthier rightly points out, “none of these games really focused on making a fast-paced PvP pirate game, so we filled the gap.” Though Skull & Bones was announced by Ubisoft several years ago with just such a premise, we’ve not heard so much as a squawk about it since 2019.

with Unreal, we constantly pushed the limits of what we thought was possible

Of course, getting to market is no mean feat, which is where Unreal Engine came in handy for the small team. “We chose UE4 as the engine for Blazing Sails for multiple reasons, but the main one is simple: it’s what we know! Unreal was taught to us on the Digital Arts and Entertainment course at Kortrijk [The school the three founding developers attended a few years ago]. A general curiosity motivated us to keep messing around in Unreal and the engine allowed us to easily convert ideas into real-time game concepts. While learning and working with Unreal, we constantly pushed the limits of what we thought was possible.”

In creating an ambitious multiplayer game like Blazing Sails, there were bound to be some technical challenges, the biggest of which in this case was designing the oceans. “There was not a lot of documentation about the topic out there when we started pre-production. Thankfully Unreal has some great tools to help develop ocean shaders. The ability to write shaders visually is an amazing asset to the engine and helped us a ton in creating the stylised water.” 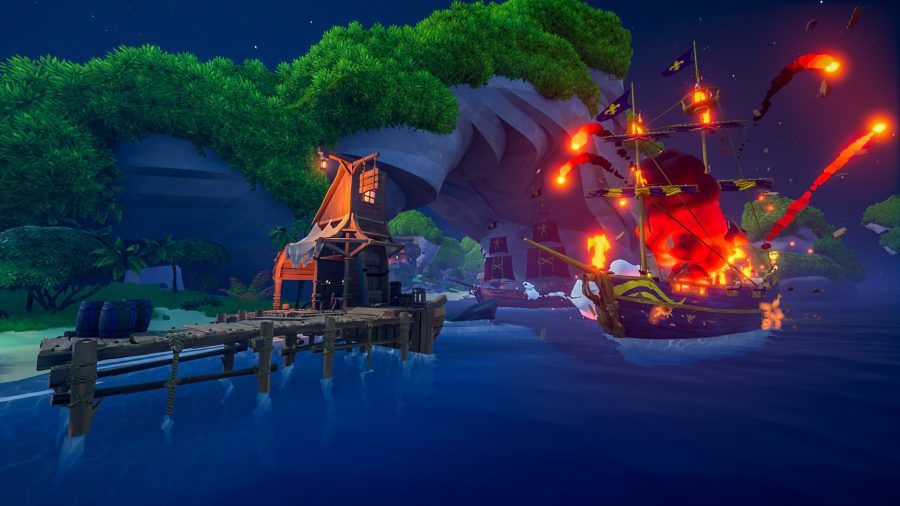 Get Up Games also appreciated the tools on offer when it came to making Blazing Sails’ map memorable. “With Unreal we have access to some great landscaping tools, and by isolating all our islands in sublevels, we could effortlessly work on the world with multiple people at a time,” Gauthier explains. It was also felt that the engine’s default movement didn’t suit what the team envisioned for Blazing Sails, but “thankfully, it was quite intuitive to build our own bespoke movement system from the ground up.”

Implementing new features in the Early Access builds of Blazing Sails was less of an issue. “During Early Access, quickly rolling [updates] out is important to keep the community interested – but of course that’s easier said than done. The entire UE4 pipeline allows us to quickly iterate on gameplay, track and fix bugs, but also increase performance via the handy Unreal monitoring tools, ensuring we can release updates very regularly.”

More like this: Here are the best pirate games on PC

Of course, while Blazing Sails is more competitively focused, comparisons with Sea of Thieves are inevitable – perhaps even invited, by the devs’ choice to use a similar art style and colour palette. How does the team feel about the comparison? “As an indie studio of four first-time developers, we think it’s a huge compliment to be compared to a triple-A studio as historic as Rare,” Gauthier says. But he does stress that “people who try Blazing Sails will find the comparison to Sea of Thieves doesn’t go very deep.

“Sea of Thieves is a bigger, more detailed pirate adventure – but that also makes it fairly slow and complicated. Our focus on Blazing Sails is very arcade-y, intended to be picked up and enjoyed quickly. There’s no RPG-style progression or story to follow. We want the action to feel fast-paced and snappy, the PvP pirate game we always wanted to play. That’s not something Sea of Thieves even wants to be, and likewise we don’t intend to add any type of adventure mode to Blazing Sails,” Gauthier says. 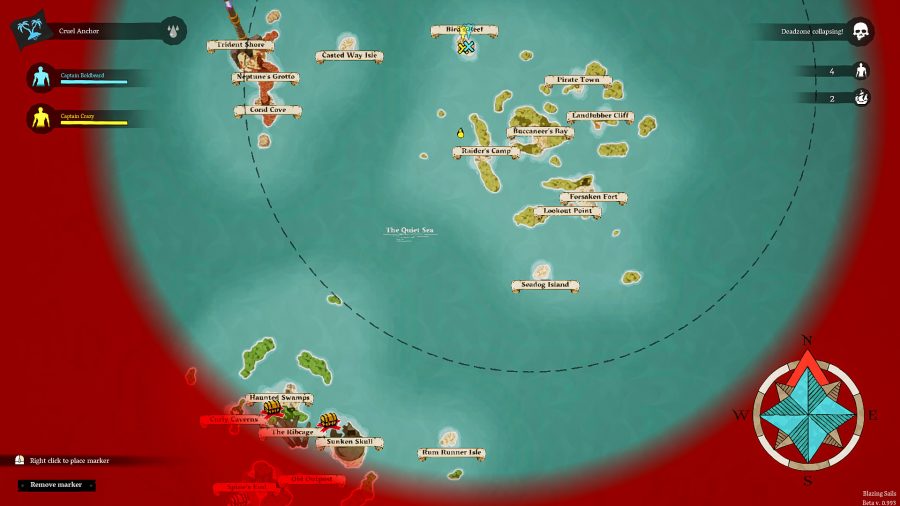 There are also plenty of obvious differences between Blazing Sails and your average battle royale, like Fortnite or PUBG. “The big feature that sets Blazing Sails apart is the ships. Unlike most battle royales, this is team-based, and you only get eliminated together when your ship sinks. Until then, you respawn when you die, which encourages more aggressive play.”

Blazing Sails is intended to be picked up and enjoyed quickly

This approach presents some unique challenges to the four-person development team. “Balancing is an ongoing thing. The entire meta of the game changes every time we add a new weapon or ship type, which we’re doing quite often in Early Access. It’s important for us to closely monitor the feedback we receive from the community and make adjustments.” However, it’s also important that the team plays the game as well: “as a team we’ve played this genre of game for a long time, so I think we usually can feel when something is off. The key, we’ve found, is to make small changes at a time, and keep in mind that people generally don’t like big changes.”

The big challenge now will be to retain players and grow the community. “Later on we’ll add more progression, like a leveling system and level-based unlocks, weekly missions, a leaderboard, and more to keep people interested in playing.” It seems that the communication between players and the developer is coming along nicely. “From the beginning, frequent communication and an active Discord server have been critical as well. It’s a two-way thing: we can host contests, share our news and offer customer support, and in return the community make friendships and share their feedback with us, which is vital to the development of a multiplayer game.” 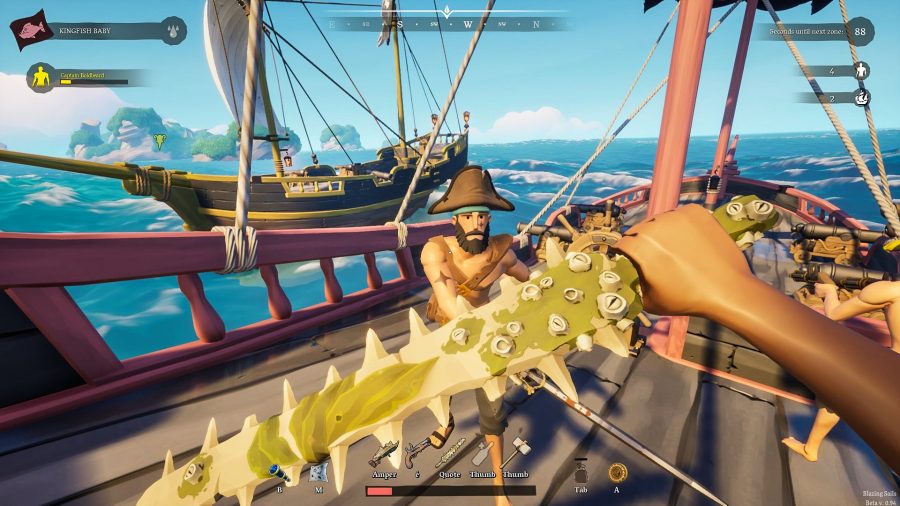 So what’s next for Blazing Sails? Get Up Games has published a roadmap, but the subsequent updates will include new islands and new ship types. “Each different ship type will be designed for a different size of crew. The plan is to make all these ship types viable against each other, too. In order to balance that out, each ship will have its own pros and cons.”

The hope is that more players will be encouraged to play the game for themselves, rather than just watch on Twitch. These inclusions sound like just the ticket to attract more players, as Gauthier rightly points out: “let’s be honest, being in a hectic naval battle with several different ship types is just epic!”

In this sponsored series, we’re looking at how game developers are taking advantage of Unreal Engine 4 to create a new generation of PC games. With thanks to Epic Games and Get Up Games.