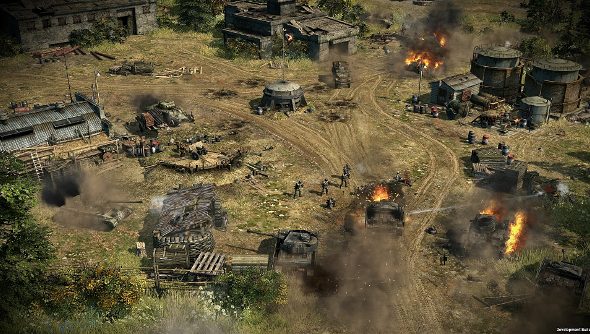 On one level, Blitzkrieg 3 is a very traditional World War 2 RTS. There isn’t a lot of focus on terrain and cover, nor on microing unit special abilities. This is a game where you push your units around the map from an isometric perspective, and used combined arms tactics to storm villages and blast down enemy fortifications.

But on another level, Nival CEO Sergey Orlovsky is trying something very unusual. He’s trying to make an asynchronous PC RTS that you can play with you friends, whether they’re online or not. He just wants to do it without “all the free to play bullshit.”

Blitzkrieg 3 will have a campaign and traditional head-to-head multiplayer, but the most interesting thing about it might just be the almost Clash of Clans-style multiplayer mode in which players will build up their own base, defend it, and try and storm other players’ bases for resources.

“So in the first part of the game,” Orlovsky said, “what you’re doing is you have certain resources, and you use those resources to build up your base and plan your defenses. So you’re building up your production buildings, your support buildings, and then you also place defenses like artillery, howitzers, bunkers, and all that kind of stuff.”

Once you have your base ready and production buildings down, you can take your army and attack other players for their resources. Those resources will be useful for new buildings and better units, if you can storm your opponents’ bases and take the resources.

“This was the biggest innovation for us, because previously, asynchronous games were not… I would say they were not popular on the PC. There were some of them on mobile, and they were doing very well there, but we wanted to it much more deep and removing all their monetization features, which are very heavy in mobile,” Orlovsky said.

Blitzkrieg 3 definitely uses recognizable moves from the mobile gaming playbook. When your base comes under attack from another player, you can choose to have push notifications sent to you so that you can hop online and attempt to fend-off the assault in-person, at which point you are playing a more traditional head-to-head game against another player. But if you’re not around, the bases defenses you built, and the units you left garrisoned there, will do their best to stave-off the attacker. 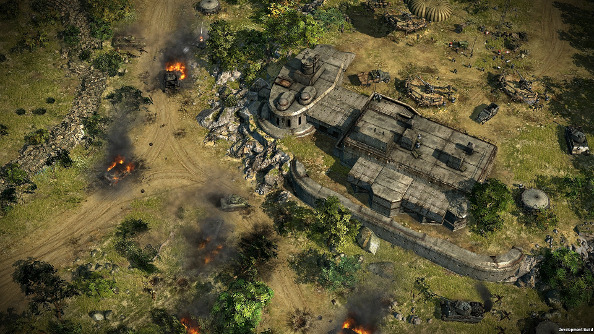 “It’s actually a lot of fun to look at how people are trying to crack your base,” Orlovsky said. “A lot of people enjoy viewing and watching replays of how their bases were attacked. And whether the attackers were successful or not, they see what kind of tactics were used to crack their base, and how to tweak and upgrade it to reduce the failures.”

The more you have at your base, the more tempting a target you become, too. Because some of the higher-level buildings require huge resource stockpiles before you can build them, other players searching for targets will see a much higher payout if they can storm your base. So the bigger your castle, the more the other kids want to come and knock it down.

Orlovsky admits that Nival are still fine-tuning the balance. He doesn’t want it to be too punishing when your base gets overrun, but at the same time, he wants to promote that kind of conflict between players. The other problem they’ve identified during Blitzkrieg 3 Early Access is that highly-active players rarely have many resources in their stockpile, because they spend it all. So the people who would be most likely to participate in a base defense are the ones who get the least opportunities to do so.

Yet Orlovsky thinks, with some justification, that this probably the direction multiplayer should be moving. It’s something Nival have been thinking about ever since they saw Backyard Monsters on Facebook.

“Asynchronous is a huge trend. Because you have a big desire to play against other players, but you also want to do it on your own time,” he explained. “So you want to play the game when it’s comfortable for you. You don’t want to spend a lot of time on matchmaking, waiting for other players, and so on and so forth. And asynchronous gaming, in general, allows you to do it much more efficiently. It lets you play with or against your friends, whether or not they’re online at the same time.”

The nice thing about doing it it in Blitzkrieg 3, Orlovsky says, is that putting it inside a more traditional PC RTS makes for a better experience.

“Our goal was and still is that we want to make the best possible multiplayer game combining both asynchronous together with synchronous modes,” he said. “And what we learned is that removing this free-to-play bullshit, as we’re calling it, makes the game is much more fun. Because there are so many things that slow down the gameplay that were invented on social for monetization purposes.”