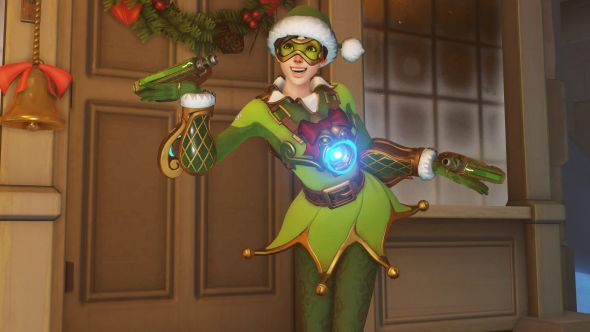 Update August 1, 2017: Four more positions have opened up on Blizzard’s unannounced project team – what, oh what, could they be building?

If you’re an artist of character, concept, environment, or technical persuasions, Blizzard might have a job for you. They’ve recently advertised for four more openings for work on an unannounced, first-person action project. Exactly what it is still remains a mystery, but it likely represents an uptick in development or move to a new stage.

Blizzard’s last shooter went straight into our list of the best FPS games on PC. Can they do it again?

There aren’t a tonne of hints in the description as to what we might be getting, beyond that the concept artist – as entry level position as you’re going to get at a company that size -“will be expected to assist in defining the overall look and feel of a wide variety of characters, weapons, environments and other elements.” That describes… just about every game ever made.

It’s also mentioned that the accepted candidate will be expected to “create original character and object concepts for every aspect of the project, including character sheets and multiple object view angles.” Character sheets suggests, at least to me, we’re talking about personalities in the style of Overwatch.

What’s interesting here is there really doesn’t seem to be a genre Blizzard haven’t already got an entry in that fits all of these criteria. They’ve got a larger-than-life FPS already, and if they were developing a single-player Overwatch campaign (as many have requested), surely they’d advertise jobs on it as part of one of the hottest teams in games right now.

Equally, some sort of Portal-ish first-person puzzle game or a walking simulator doesn’t fit the descriptors we’ve had of the game – action focused, having multiple weapons to design. Dishonored and Prey’s brand of immersive sim also doesn’t really fit Blizzard’s development paradigms of always-online, hyper-popular genres. Neither does a Bethesda-style Warcraft RPG, nevermind the conflict there with every WoW expansion’s significant soloable story-based element.

It could be something wholly original but, well, that would be a first. Given the fundamental nature of these jobs, along with the others still being advertised, it’ll be a while until we find out.

Original story June 9, 2017:The PCGN news team continue to scour Blizzard’s job board – not for any reason that would make our employers suspicious, but for any hints on their upcoming projects – and we’ve just found a new vacancy on their unannounced first-person game.

The latest ad is for a senior technical artist, specialising in animation. The hire will “create rigs and tools for animating a wide range of characters and creatures.” “Experience with games that use a first-person perspective” is listed as a plus, reconfirming that they’re making a first-person game, as is “knowledge, understanding, and familiarity with Blizzard universes and lore.”

That last bit’s interesting. Familiarity with Blizzard’s games could be considered a general advantage, or it could mean that the game is based in one of their existing universes. And on that note, let us remind you about StarCraft: Ghost, a third-person stealth-shooter that was in development in the early ’00s, until it was cancelled and repurposed into other media. Overwatch’s first year has also proved there’s a lot of demand for a story-focused campaign, of course.

The new ad joins two others from a while ago, seeking lead engineand tools engineers to develop “a robust first-person engine for an unannounced project.” That Blizzard are building a new first-person engine from scratch suggests the new game needs different capabilities than any of their existing tech – including the Overwatch engine – can provide. If itisan Overwatch campaign, it’ll be much more than an adjunct to the multiplayer game.

My money’s still on a StarCraft shooter – Blizzard have to do something with the IP – and our resident Blizzard wizard Ben Barrett concurs that “StarCraft makes the most sense, but also none at all.” So. There you go. Journalism.