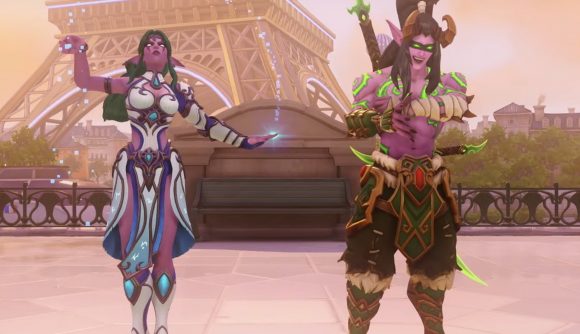 We’re precisely one month away from BlizzCon 2019, and besides broad anticipation for whatever Blizzard is working on next, that also means it’s time to see what kind of digital baubles we’ll get as part of this year’s Virtual Ticket. There’s nothing quite so substantial as a WoW Classic demo this time around, but there is the usual selection of in-game items across Blizzard titles.

This year’s coolest additions are probably the new WoW-themed Overwatch skins, which fully transform Genji into Illidan and Symmetra into Tyrande. WoW itself has two murloc-themed faction leaders – Finduin for the Alliance and Gilvanas for the Horde – as well as a fuzzy transmog outfit in Wendigo Woolies.

Hearthstone gets a new card back and an as-yet-unrevealed new golden legendary. Heroes of the Storm gets a BlizzCon spray and portrait, as well as the Celestial Deepcrawler mount. StarCraft II gets nostalgic with some Brood War skins and portraits, with classic editions of the Battlecruiser, Carrier, and Ultralisk available.

And Diablo fans get a pair of wings for Diablo 3.

Check it all out in the video above, or the official site.

Reports suggest that both Overwatch 2 and Diablo 4 will make their debut at BlizzCon this year, so it’s no surprise that the Blizzard-branded ‘classic’ game Diablo 3 is getting the lighter selection of BlizzCon goodies this year.