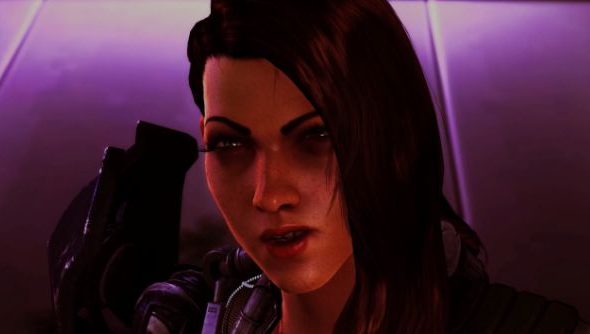 3D Realms’ sci-fi Diablo-esque-with-guns Bombshell is out before the end of the month, so it’s starting the push towards release. Today’s trailer reveals the two main voice actors playing hero Shelly Harrison and her arch-nemesis/old friend Professor Jadus Heskel. Like a more jaded Judus, we assume.

While you wait for 2016’s release tidal wave to hit, amuse yourself with the best RPGs on PC.

Bombshell is being played byValerie Arem, who I’ve heard in nothing except Titanfall, where she did a great job of letting me know when it was time to get the hell out of the robot, or, indeed, into the robot. Meanwhile Jon St. John, of very specific fame, voices the hilariously named and captured villain, who seems to be composed purely out of the melted plastic and spiky bits at the bottom of a Warhammer 40k hobby box. His voice direction seems to have stretched as far as “do a Joker impression”, if this trailer is anything to go by.

I’ve expressed my rather odd obsession with Bombshell and desire for it to be good before, and with every trailer I’m no closer to a conclusion on quality. It’s still beautifully designed and rendered, an over-the-top sci-fi feel to it that pushes all my buttons. But some of those lines, and the awkwardness of the gameplay last time we saw it, don’t make me brim with confidence. Plus, what did those monitors ever do to you, Shelly? They were clearlyalready broken and your reaction suggests you knew shooting them would have no effect. This is just wanton destruction of government property.

We’ll get to find out just how far that vein of anger towards digital displays goes on January 29th, as well as slightly more important things like ‘how good the game is’ and ‘will it be fun.’ What’s your prediction?