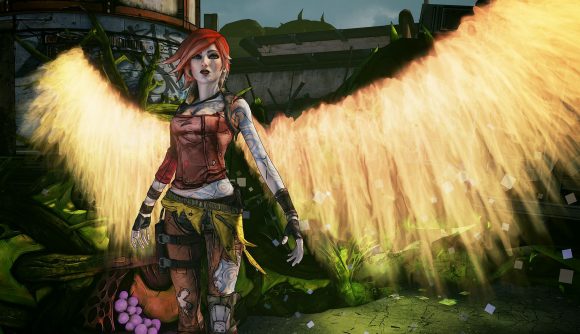 Borderlands 3 releases later this year, but that doesn’t mean that Gearbox is finished with its predecessor just yet. New DLC for the game was leaked via Steam.DB last night, taking fans back to Sanctuary one final time.

The DLC showed up on Steam, but was quickly taken down. Thankfully, the product description of the expansion was posted to Resetera (via Polygon). The new adventure, titled Commander Lilith & The Fight for Sanctuary, will “set the stage for the upcoming Borderlands 3,” bridging the gap between the two games.

According to the description, the new DLC will see Sanctuary under siege, with the Vault map stolen and a toxic gas poisoning Pandora. There’ll be new zones to explore and bosses to fight, and, of course, new loot (including a new tier that screenshots seem to confirm is the Rainbow-tier loot discovered earlier this year). Players returning to the game will have access to a new level cap at level 80, while anyone experiencing the game for the first time can automatically boost themselves to level 30 to ensure they don’t miss out on the action.

The game’s setting could shine a light on some of the easter eggs hidden around the Borderlands 3 reveal earlier this year. Borderlands 2 featured Sanctuary as a hub area, and the new game’s equivalent is a spaceship known as Sanctuary 3. There’s a glaring omission there, of course, but apparently “we don’t talk about Sanctuary 2.”

Borderlands 2: Commander Lilith & The Fight For Sanctuary will get a store page soon

Beyond that, details are scarce, but screenshots captured from Steam show Lilith, Brick, and Tiny Tina, as well as a new boss called Uranus. Which is hilarious, obviously.

Blast off: New Borderlands 3 planets and vault hunters will be shown off at E3

Perhaps not too surprisingly for a game that’s now several years old, it looks like the new DLC will be free, but expect official confirmation of that during E3 next week. The Borderlands 3 release date isn’t for a few months yet, but you can expect Borderlands 2’s fight for Sanctuary to begin during the expo.