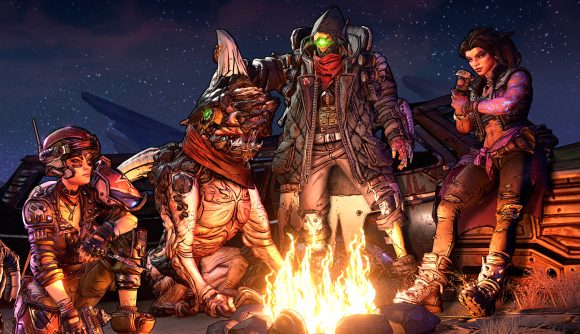 It’s no surprise that Borderlands 3 will have a significant presence at this year’s E3 – with a release date set for this fall, it stands to reason Gearbox would want to hype up the game at the year’s biggest trade show. Beyond that, it’s published some very detailed cosplay guides with an eye to kicking off a global Borderlands 3 cosplay tour at E3.

Now, Gearbox CEO Randy Pitchford says fans can look forward to seeing some new game content at the show as well, including a new vault hunter, a new planet, and more.

“Borderlands fans have a lot to look forward to at E3,” Pitchford tweeted Friday afternoon. He said show attendees will have a chance to play Borderlands 3 at the 2K booth, and that Gearbox would be revealing a new vault hunter and a new planet as well.

“We may even have a surprise or two up our sleeves… EXCITED!” he said.
What that surprise – or surprises – might be is anyone’s guess, but a new vault hunter is pretty exciting, given how these tend to become important characters in the Borderlands universe.

So far, we’ve seen four of Borderlands 3’s new vault hunters, which are Amara the Siren, Zane the Operative, FL4K the Beastmaster, and Moze the Soldier. Whether Gearbox plans on adding another new vault hunter type to the mix or perhaps bringing back a class from one of the previous games is, for now, a mystery.

Borderlands fans have a lot to look forward to at E3! We’ll be showing new gameplay, a new Vault Hunter and a New Planet! Attendees will also have a chance to play #Borderlands3 at the 2K booth! We may even have a surprise or two up our sleeves… EXCITED!

A new planet, too, is interesting. From what we’ve seen so far, Borderlands 3 already features a lot more environmental diversity, and presumably each planet you travel to in the game will have its own distinct aesthetic.

Read more: Here’s everything we know about Borderlands 3

But as far as what Pitchford could be hinting at with his mention of surprises? It’s anyone’s guess, really. I’d be keen on seeing more of the vehicles Gearbox has planned for the game, but that hardly seems worth teasing as a bigger surprise than a new vault hunter. Could he be hinting at a whole new game mode? Border-royale, perhaps?

We’ll find out during E3, which kicks off in Los Angeles June 11.