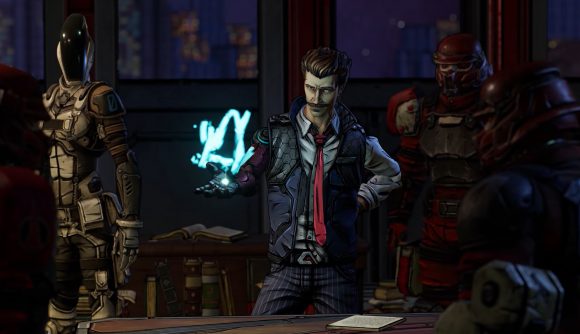 Troy Baker is one of the most prolific voice actors in games, and his credits include Rhys from Telltale’s beloved Tales from the Borderlands series. The first Borderlands 3 trailer suggests that Rhys will soon jump over to the main series, but it’s going to be without Baker’s voice. You may have seen already Baker’s repeated comments on wanting to be into the game, but now Gearbox boss Randy Pitchford says it was Baker who turned down the role in the first place.

After a fan on Twitter asked why Baker wouldn’t reprise his role as Rhys, Pitchford says “You’ll have to ask Troy. I was told by the audio director that he turned it down. Fortunately, with how Rhys appears in the game, I don’t think it actually matters at all. You’ll see for yourself when the game comes out and you may disagree with me on that or not.”

This comes after Baker’s comments at a recent convention (via Game Informer), where he said “I really want Gearbox to know that if they’re going to bring back characters from Tales From The Borderlands. it should be the people who originated the characters.” Baker also said “If I had turned it down flatly, we wouldn’t be having this conversation.”

Even before that video, Baker’s Twitter feed was filled with messages tagging the official Gearbox account about how much he’d like to be in the game.

Clearly, one or both sides aren’t giving a complete picture of what’s happening. Baker seems to indicate that he has been in direct contact with Gearbox about the role, but the exact dispute – and who turned down who – is currently unclear.

For his part, Pitchford followed up his tweet about Baker to say “He’s great – an incredible talent. I felt like we discovered magic when we first cast him in Brothers in Arms. His work there proved his talent to the video game world and he has been crushing it ever since.”

The Borderlands 3 release date is set for September 13 – unless you really want to play it on Steam, of course. Regardless, you can follow that link for much more on everything we know about the game so far.