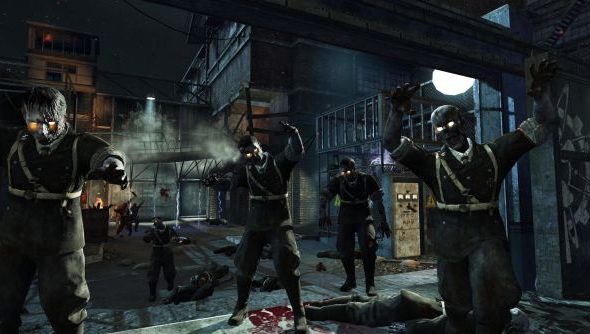 What are the core tenets of CoD? Let’s see: you used to be guaranteed exactly one NPC with an excellent moustache, and a level you’d never play with your mum in the room. Nowadays you get young men running ceaselessly around tightly-coiled maps, and zombies.

Call of Duty: Advanced Warfare is out today, and doesn’t have its dedicated Zombies mode yet. But US retailords GameStop seem to think it’ll arrive at a later date as DLC.

“Breaking News for Call of Duty Fans – Zombies are Back!”, read a GameStop press release.

“This just in, Zombies are back as part of the Call of Duty: Advanced Warfare season pass! Stop by any GameStop to pick up one of the most anticipated games to launch this year, along with four multiplayer map packs, Atlas Gorge, and yes – ZOMBIES.”

There’s no word on when the zombies are coming, but CoD tradition dictates that we’ll get them about a month after our chums on Xbox.

In the meantime, there is a wave of zombies you can enjoy as part of Advanced Warfare’s co-op survival mode. But you’ll have to shoot them in between waves of normal old human beings with their boring, regular respiratory functions.

It’s semi-possible to buy Advanced Warfare in a shop today, in its limited Day Zero edition. Its full retail release is scheduled for tomorrow. But in the likely event you have a Steam account, you should know that the new Call of Duty has unlocked already. Perhaps you’ve played a bit of it? How Spaced out are the Spacey parts?