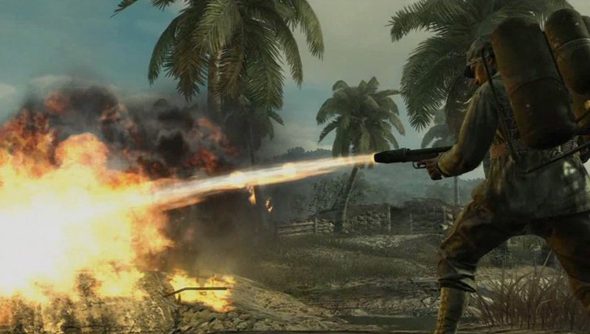 Call of Duty – and Red Orchestra aside, the FPS world in general – has long since vacated the Pacific Front and fields of northern France in favour of modern and future warfare.

But given the chance, Sledgehammer’s Michael Condrey would love to go back to the sombre remembrance and single, sustained trumpet notes of the original CoD and its sequel.

“Some of my favourite pieces of entertainment are set in World War II,” the Sledgehammer co-founder told Metro. “I’m a massive fan of Band of Brothers.”

Condrey went on to praise Saving Private Ryan, the clear tonal inspiration for much of Call of Duty 1 and Medal of Honor: Allied Assault before it, and called WWII a “great hero’s war”.

“That’s kind of the last that was recognised as a noble cause in a war,” he said. “So yeah, I think a next generation game with the latest production values and robustness in a World War II setting like Band of Brothers would be amazing.”

Ironically enough, however, Sledgehammer’s own innovations for the series would make a return to historical shooters a trickier sell than before.

“How would it play and how would the multiplayer work after the new movement set in Advanced Warfare?,” asked Condrey. “That’s a tougher question than I’ve had to tackle yet.”

Our Fraser took a look at Call of Duty: Advanced Warfare’s PC port this week and found it to be pretty solid. Do you think Sledgehammer are ready to take the fight back to WWII?