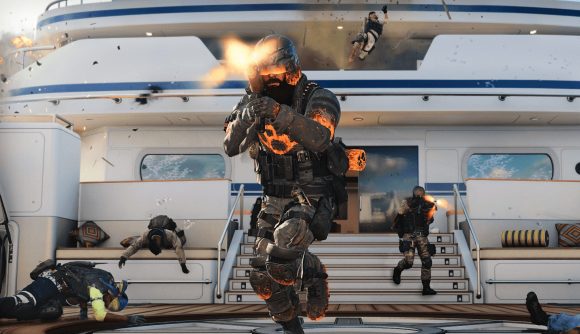 You might find that Call of Duty: Black Ops – Cold War’s Nail Gun isn’t hitting quite as strongly as it used to. That’s because Raven Software has decreased the maximum damage range by 39%, with the developer explaining in a recent swathe of patch notes that the submachine gun gave shotguns a bit of a tough time.

“The Nail Gun is and was meant to be a lethal, highly-mobile, short-range dominator,” Raven explains. “However, its maximum damage range far exceeded the lethal range of shotguns, which it is intended to contest. The Nail Gun’s generous range and mobility allowed it to consistently dispatch foes at the same speed or faster than shotguns at almost twice their effective range. While the Nail Gun’s pick rate has remained relatively low, we believe it would have been much higher were it more easily accessible.”

Raven has also reined in Call of Duty: Black Ops – Cold War’s assault rifles a wee bit. The C58 and FARA 83 have had their recoil “increased slightly”, though the studio doesn’t go into more detail than that. Raven has also tweaked the recoil on heaps of Cold War’s barrels, such as the Ranger, Takedown, Reinforced Heavy, Match Grade, VDV Reinforced, Task Force, Spetsnaz RPK, and CMV Mil-Spec.

“We are satisfied with the overall direction of adding recoil control to BOCW Barrels,” the developer explains. “However, we would like the effectiveness of a weapon to grow with the wielder as they improve. We felt with the magnitude by which recoil was being reduced, there was hardly any room left to master the control of these Weapons.

“We want weapons to reward you for learning their reload timings, recoil patterns, and bullets to kill. Your proficiency with a Weapon should be a journey that is worked toward with an equivalent payoff.”

If you’re curious what the best Call of Duty: Black Ops – Cold War guns are following the shakeup, you can hit that link.