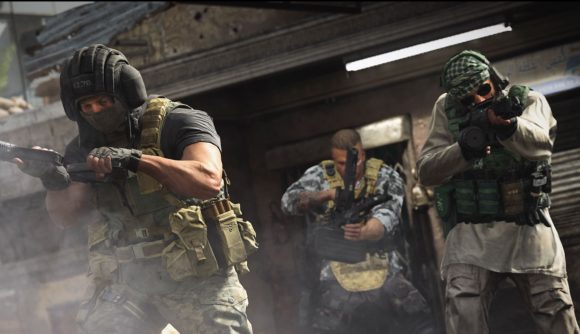 Call of Duty: Modern Warfare has a brand new mode: Grind. Activision marked the mode’s release in a blog post, explaining its mixture of rules from Kill Confirmed and Hardpoint.

On the subject of the mode’s rules, the post reads, “kills in this mode must be confirmed by picking up dog tags from fallen players and taking them to an objective location to score points for your team. The objective rotates around the map making it even more of a challenge to earn points.” In short: kill, collect a tag, and get to the objective. Sweet and simple.

You can carry more than one dog tag at a time, however dying with any on you drops them all, including an additional tag for yourself. Collecting the tags of fallen friends will prevent the enemy team scoring that kill, so be on the lookout for teammates in danger. The mode isn’t all about kills, it’s also about making tactical retreats and taking risks. Shoot as many people as you like, but without those dog tags, you aren’t going to win.

The post goes on to explain at length the tactics and certain tips to keep in mind for the game mode, including remembering it’s point-based rather than kill based, and balancing the risk and rewards for delivering multiple dog tags at once.

If you played Call of Duty: Ghosts, you may remember Grind, but the mode has also been available under the name Fracture in Call of Duty: Black Ops 3, or Stockpile in Black Ops 4. Despite appearing with different names in multiple games, the base idea of the mode is the same.

Modern Warfare is also set to receive more custom loadout slots in the near future, but let’s hope that the game’s chairs stop killing people. It’s quite rude actually.