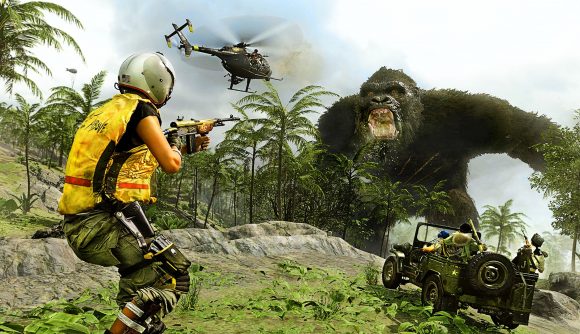 After lots of waiting, the Call of Duty: Warzone Operation Monarch event time is nearly here. The popular war game’s next big event sees Godzilla and King Kong duke it out while you and your team battle it out against everyone else in the lobby to be the last one standing.

Operation Monarch is a limited-time mode that puts a beastly spin on the usual Quads offering. You’ll have to contend with Godzilla circling the map as he intermittently creates dangerous areas with his heat ray, while King Kong will leap around and crush anyone unfortunate enough to be standing where he lands.

Now and then, the Titan Frenzy alert will disrupt the general rhythm of the match. When this happens, you’ll want to deal damage to one of the monsters as they start attacking more aggressively. Not only will you repel the danger, but you’ll get a S.C.R.E.A.M device if your squad deals the most damage. The device is essentially a killstreak that allows you to direct an attack from King Kong or Godzilla at a point in the map. You can also get a S.C.R.E.A.M device by filling your intel meter, which can be done through scavenging, hitting supply drops, or damaging the big beasts.

The Call of Duty: Warzone Operation Monarch event time is 9am PDT / 12pm EDT / 5pm BST. Season 3 is already live, so you’re unlikely to need any massive downloads, though you might need a small patch to play the event.

The event runs from May 11-25. For everything else on Call of Duty: Warzone Operation Monarch, you can follow that link.