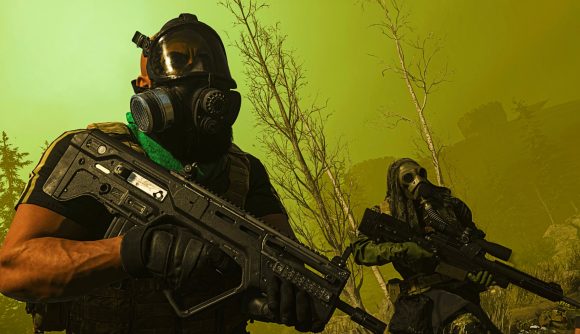 A new update for Call of Duty: Warzone has brought about a familiar problem, it seems. The battle royale game got its mid-season update the other day (March 30), and not long after it went live, players took to Twitter and Reddit in droves to report that the stim glitch is back for the seventh time.

We’ve seen the healing item exploit pop up a few times now, though how you pull it off tends to vary. Some of the steps last time involved throwing a frag grenade, picking up some C4, and then using the stim. Regardless of how you do it, though, it tends to wind players up and with good reason. It allows anyone who abuses the glitch to venture out into the smoke and sit there, healing themselves indefinitely until everyone else is wiped out when the ring fully closes. It’s not everyone’s idea of fun, it turns out.

That might not be all, either, as several players have also reported that the Warzone invisibility glitch has returned to coincide with the attack helicopter making its comeback. If you’ve missed this one, it involved crashing while using the helicopter’s minigun.

There are a few clips of people encountering the stim glitch hopping around, but here’s one of them:

We’ve reached out to Activision for comment and clarification and will update this story if we hear back. If you’re looking for the best Warzone loadout drops to deal with those pesky stim glitchers, you know where to click.