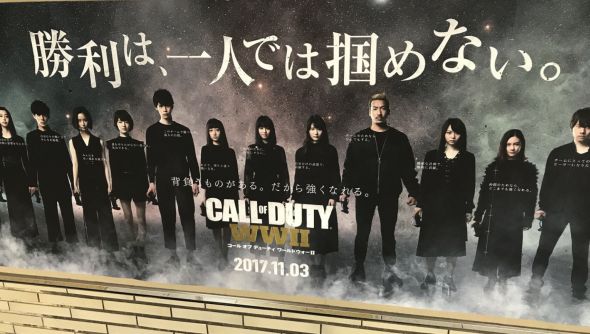 Japan’s Call of Duty: WWII advertising campaign isn’t going down particularly well, with adverts being labelled ‘dorky’ by some players.

Check out our Call of Duty: World War II review-in-progress.

It’s fair to say that the campaign doesn’t exactly focus on the game’s content. Instead, there’s a lot of young people in dark clothing, clutching controllers and captioned with teamwork-oriented slogans. The campaign’s overarching tagline is “You cannot seize victory alone.”

That tagline isn’t too different from the English version, which encourages players to get their old squads back together for the series’ return to the 1940s, but the funeral vibe isn’t exactly playing well with Japanese fans, who have labelled the ads “dasai” or dorky.

It’s not even entirely certain why the adverts have departed so strongly from the game itself. There are no laws in Japan about depictions of characters in military dress, and while the English advert isn’t dwelling on the setting either, it’s a much less dour-looking affair. Nevertheless, it doesn’t seem as though the unpopular campaign has had too big an impact – COD: WW2 sold 57% more than Infinite Warfare at launch.